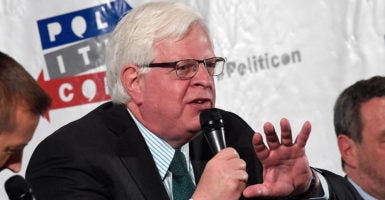 “To suggest that PragerU’s content is obscene, violent, hate speech is an absolute insult to the intelligence of the American public and people like yourself, who are willing to enter the important political dialogue,” Peter Obstler, PragerU’s lead attorney, told reporters and others at a press conference Tuesday in Seattle.

U.S. District Judge Lucy Koh, appointed by President Barack Obama, dismissed the lawsuit in March, ruling that Google does not have to treat those who use its services equally.

The legal battle by the organization co-founded by commentator and talk radio host Dennis Prager began in October 2017. Prager University, known as PragerU, filed a lawsuit against Google after YouTube placed more than 100 of its videos in “restricted” mode, flagging them as “dangerous” or “derogatory,” according to a press release from PragerU.

“‘Restricted’ means that families that have a filter to avoid pornography and violence cannot see that video,” Prager told a Senate subcommittee in a July hearing.

PragerU said in the press release that it filed the suit because Google and YouTube have restricted 10% of its video content and “maintains that the organization’s videos have been restricted, not because they are explicit, vulgar or obscene in nature, or inappropriate for children in any way, but rather because they promote conservative ideas.”

The videos categorized as restricted cover a range of topics, including the Ten Commandments, tolerance, climate change, free speech, and fake news, and tend to be three to five minutes in length.

Obstler said the organization, which focuses on teaching America’s founding principles and institutions and has more than 2 million YouTube subscribers, is ready to take the case as far as the Supreme Court.

“We will be back, but I am optimistic that we got a very fair hearing with three very able judges today,” Obstler said. “I believe they will do the right thing, and I believe that we will survive in federal court.”

Google’s defenders argue that all PragerU videos are available to the 98% of YouTube users who haven’t enabled the “restricted” mode. PragerU supporters counter that the remaining 2% number in the millions.

Supporters of Google’s stance also argue that those on various parts of the political spectrum can point to examples where they believe YouTube treated their videos unfairly, usually because of the “restricted” mode created for more mature content.

Pete Wilson, a former U.S. senator and governor of California, also spoke at the press conference, saying he is hopeful that PragerU will prevail. Wilson’s law firm represents the organization.

“My hope, at least my optimistic expectation … is that this court may give us that second chance,” Wilson said.

Obstler said the case is vitally important because it is closely related to the First Amendment right of free speech.

“Civil dialogue and civil discourse in an open way is the only thing that can keep our democracy going,” Obstler said.