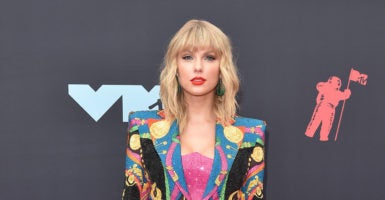 Editor’s note: Taylor Swift is speaking out about her support for the Equality Act, legislation passed by the House earlier this year that, if enacted, could affect everything from bathrooms to pronouns to women’s sports to parental rights.

Accepting her award for her video, “You Need to Calm Down,” Swift noted the award was based on votes. “So you voting for this video means that you want a world where we’re all treated equally under the law, regardless of who we love, regardless of how we identify,” the singer said Monday night at the MTV Video Music Awards.

“At the end of this video, there was a petition, and there still is a petition, for the Equality Act, which basically just says we all deserve equal rights under the law,” Swift added. “And I want to thank everyone who signed that petition because it now has half a million signatures, which is five times the amount that it would need to warrant a response from the White House.”

Here is a reprint of an article, first published in The Daily Signal March 14, that explains the consequences Americans could face because of the Equality Act.

In fact, the current issue of the American Journal of Bioethics includes an article arguing that the state should overrule the parentsof transgender children who do not consent to give them puberty-blocking drugs.