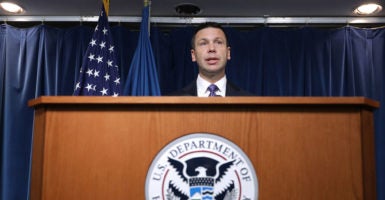 The Trump administration is issuing a new rule Friday aimed at fixing one of the central problems facing the U.S. immigration system today.

The new regulation addresses the Flores settlement and how the U.S. deals with the surge of families and children being brought to the U.S. border.

Why is this such a big deal?

Well, the Flores settlement was agreed to in 1997 and required the government to treat unaccompanied minors—children who come to the border alone—in certain ways. They should be kept in minimally secure locations, and only for so long, etc.

But at the end of the Obama administration, the California district court responsible for the settlement and the 9th U.S. Circuit Court of Appeals decided that the Flores settlement also applied to accompanied children.

The court decided the government could not hold accompanied children with their parents for more than 20 days.

To be clear, this ruling left the government with only two options:

The Obama administration fought this ruling because even it realized how destructive the decision was. Fast-forward to today, and we’ve been seeing the predictable results.

Illegal immigration to the U.S. has spiked, resulting in a humanitarian and law enforcement disaster on the U.S. southern border. Specifically, illegal immigrants are almost all bringing children with them on these dangerous journeys north.

What changed in the intervening two years’ time?

The new Flores decision handed down by the courts at the end of the Obama administration changed how we handled adults with children, and the word slowly but surely got out that bringing a child to the U.S. border was a golden ticket into the U.S.

The new Trump rule is an attempt to return to the previous Obama-era policies. It would allow the Department of Homeland Security to hold family units together in separate family detention centers as was done in the Obama administration.

Then their claims could be adjudicated, and most would be returned to their home countries. By ensuring that illegal immigrants are detained and quickly returned home, the U.S. can deter people from coming in the first place.

Rather than a golden ticket, coming to the U.S. with your children will simply be recognized for what it is; namely, incredibly dangerous.

The U.S. can and should humanely take care of children coming across our southern border and keep them together with their families. But if we want to stop the dangerous spike in illegal immigration with children, the Flores settlement must be overridden and replaced.

The Trump administration is doing just that, though this case will likely find its way quickly into a court battle. The ultimate solution to Flores, as well as solving related problems in the asylum system, should come from Congress.

But for now, all Americans should thank the Trump administration for returning to the Obama-era rules on how we can process accompanied children being brought to our border.