‘We Are Facing One of the Biggest Authoritarian States’: A Hong Kong Politician Speaks Out 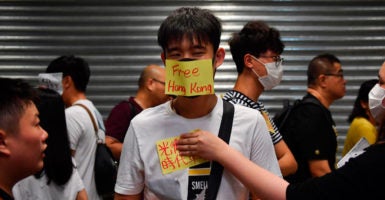 Pro-democracy protests in Hong Kong continue as China flexes its muscles and warns of an intervention. Today, we feature an exclusive interview with Alvin Yeung, a politician from Hong Kong who supports the protests and hopes to achieve reforms. Read the interview, posted below, or listen on the podcast:

Daniel Davis: We’re joined now over the phone by Alvin Yeung. He is an elected representative from Hong Kong where he leads the pro-democracy Civic Party and is a member of the Legislative Council.

Mr. Yeung, thanks so much for your time today.

Alvin Yeung:  Hello. Thank you for having me.

Davis: We’ve been following the recent protests in Hong Kong as they’ve developed, but I wanted to take a step back first and get some context.

You’re an elected member of Hong Kong’s legislative body, where the extradition bill was originally proposed and then tabled. Can you explain for us why that bill was able to be proposed if it turned out to be so unpopular?

Yeung: Audience from America have to understand the fact that the Hong Kong legislature is not entirely democratic as it sounds.

Half of the legislature was returned by geographical “one person, one vote” system, and that’s where I come from. But the other half of it comes from something called functional constituencies and they are representatives from different industries like the banking, legal, medical, etc. And some of them have corporate votes.

Not everybody working in a bank gets a vote to vote for their banking representative, but only those bankers or the people who actually own a bank get to vote.

So there’s this inequality in the system, and when the government enjoys a majority because of that system, they would count the votes and they think they could just go ahead on anything controversial.

Kate Trinko: Of course we’ve all been following these massive protests, and is the main thing at seat the extradition bill? Or are there other issues, other demands, from the protesters of things they want to see changed?

Yeung: At the beginning, people in Hong Kong took to the street to protest against this highly controversial extradition bill, but shortly after we understand that it goes way beyond the bill, it’s the system itself.

Trinko: And are there any other demands that the protesters are looking to get?

Davis: Is there a path toward that kind of reform you’re looking for? What’s the strategy going forward?

Yeung: Right now the ball is in the court of the Hong Kong government and Beijing. If they really treasure Hong Kong, especially this very special city, then they have to understand that what Hong Kong people are demanding is not something so unreasonable.

We are not asking for the moon. We are simply asking for something that was promised by Beijing, as stated clearly in the Basic Law, Basic Law is our mini constitution.

Trinko: How does your party, and other politicians in your party, feel about the protests right now?

Davis: We’ve seen reports that the Chinese military is doing drills in Shenzhen, right across from Hong Kong. How would you, and your political allies, respond if China decided to intervene?

Yeung: We do have a fear that the army, or the armed police, would be deployed to Hong Kong. But again, this is why we are asking the international community to continue paying attention to Hong Kong.

Never forget Hong Kong is not an ordinary city of China. We are not in isolation. Hong Kong is an international financial city. … The United States has huge amounts, billions of dollars, of investments and 85,000 United States nationals working or living in Hong Kong. So that would not only affect and harm Hong Kong, that will also harm the rest of the world who has a stake in Hong Kong.

I just hope that Beijing would have the wisdom not to deploy troops in Hong Kong, because that will end “one country, two systems.”

Trinko: There’s been concerns, particularly with this action from China, that this could end up being another Tiananmen Square. Do you think that that analogy makes sense or do you reject it?

Yeung: Again, I do share that fear that Hong Kong will become another Tiananmen Square, but then again, I have to repeat this, we are now in 2019, it’s not 1989.

Hong Kong is not another Tiananmen for the simple fact that we are an open society, the world is watching, we are well-connected to the rest of the world. Anything that happens in Hong Kong would be seen in everyone’s TV screen or phone screen within seconds. So if Beijing dares to really risk the special status of Hong Kong, then it would be extremely wrong to them.

Davis: And of course so much of this … comes in the context of the 50-year window between the handover in 1997 and 2047, when Hong Kong is scheduled to return fully to the Chinese system.

How do you, and your political allies, look toward the future looking at that 2047 deadline? Would you like to see it delayed or some alternative future?

Yeung: We are working very hard to lay foundations for the future negotiation with Beijing if that ever happens. That we wish to see Hong Kong stays unique, we wish to see Hong Kong stay as a member of liberal democracy. That the values that we share with the rest of the world, at least the Western world, that freedom of speech can be upheld, that we can still have free elections. Although these are the things that we are facing challenges with.

Right now Hong Kong is under challenge on all different fronts, but then we are urging the rest of the world to pay attention to Hong Kong, so that we can continue to enjoy the freedoms that we were supposed to have.

Trinko: Have you been able to participate in any of these protests yourself?

Yeung: Yes, I have been joining different protests, or standing at the forefront. Not all of them, but most of them.

Trinko: What is the experience like? What are people saying? How long are they out there? I think it’s just extraordinary. I believe one of them had 1 out of every 7 people in Hong Kong there. Those numbers are just unheard of. What is it like on the ground when you’re there?

Most recently, in the last weekend, we had 1.7 million people take to the streets in a peaceful manner, under the rain, to tell the rest of the world—and of course the Hong Kong and Beijing government—that all we are asking for is, No. 1, democracy, and No.2, a formal withdrawal of the bill and investigation of police misconduct.

Davis: We’ve seen so many of those powerful images and even videos of protesters recently waving American flags and singing “The Star-Spangled Banner.” What role should the United States be playing in this, if at all?

Yeung: I’m here in the United States right now while we are talking to have a Hong Kong-U.S. dialogue with a U.S. congressman and senator. And we are telling our friends here to continue paying attention to Hong Kong, as Hong Kong is not standing in isolation.

We are at a forefront of two different ideas, that is the liberal democracies ideas, and we are facing one of the biggest authoritarian states on Earth. So Hong Kong cannot stay alone. We need support, at least moral support, or any kind of support, from the rest of the world so that we understand we are not fighting this fight just on our own.

Trinko: Is there anything else that we didn’t ask you about that you think Americans should know?

Yeung: I appreciate the attention, and care, and support paid by Americans over the past two and a half months. I just wish that that could continue because we need support from the rest of the world, especially those from the United States of America.

Davis: All right. Alvin Yeung, thank you so much for your time today.

Yeung: Thank you very much.