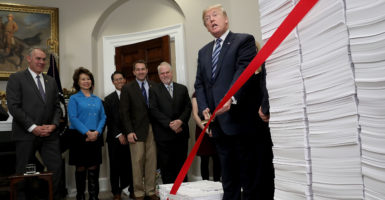 “Remove the anchor dragging us down!” he said when campaigning for president. “We’re going to cancel every needless job-killing regulation!”

Trump was a developer, so he knew that the thicket of rules government imposes often makes it impossible to get things done.

But would he keep his deregulation promise? I was skeptical.

Republicans often talk deregulation but then add rules. People called President George W. Bush an “anti-regulator.” But once he was president, he hired 90,000 new regulators!

Trump has been different.

When he took office, he hired regulation skeptics. He told government agencies: Get rid of two regulations for every new one you add.

I think his anti-regulation attitude is why stock prices rose and unemployment dropped. Trump sent a message to business: Government will no longer try to crush you. Businesses then started hiring.

They call Trump’s moves “an attack on the environment” and on “workers’ health.” The New York Times ran the headline “Donald Trump Is Trying to Kill You!”

What the media don’t get is that regulations have unintended side effects that often outweigh the good they’re intended to do.

“Should the government tell you what kind of car to buy?” asks Grover Norquist of Americans for Tax Reform in my new video about Trump.

Norquist says that Trump has largely kept his deregulation promise, and that’s been great for America.

For example, Trump repealed the Obama-era plan to classify franchise businesses like McDonald’s as one single business. Why?

Of course, none of those things happened. Or as Norquist puts it: “None of it! None of it!”

But some Obama regulations sounded so important.

Norquist laughs at that. “The names for these regulations are written by regulators. They’re advertisements for themselves.”

Of course, unlike advertisers, regulators don’t list side effects of their rules, which Norquist says should read: “May cause unemployment, may reduce wages, may raise the cost of energy, may make your car not drivable.”

Trump’s deregulation record would be better were he not so eager to add regulations, such as tariffs, at the same time.

“There is a challenge. Trump is a protectionist in many ways,” says Norquist, sadly. “Tariffs are taxes, and regulations on the border are regulations on consumers.”

So are Trump’s “buy American” rules.

“That sounds like a good idea, but it’s a dumb idea, and I wish he hadn’t done it,” says Norquist. “That is not deregulation. The good news is that the vast majority of the acts have been deregulatory and tremendously helpful.”

Recently, Trump announced, “We have cut 22 regulations for every new regulation!”

He exaggerated, as he often does. The real number is about five. But that’s still pretty good. Better than Ronald Reagan did.

I wish Trump would do more.

I wish he’d remove his tariffs and agricultural subsidies and kill the Export-Import Bank, drug prohibition, and the onerous rules that encourage illegal immigration by making it almost impossible for foreigners to work here legally.

Keep your promise, Trump! Repeal 22 regulations for every new one!

Every excessive rule repealed is a step in the right direction: toward freedom.