What Will They Learn at College? 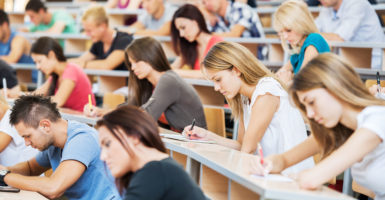 Only 68% of the colleges the American Council of Trustees and Alumni surveyed in "What Will They Learn? 2018-19" require three or fewer of the seven core subjects. (Photo: skynesher/Getty Images)

For many parents, August is a month of both pride and tears. Pride because their teenager is taking that big educational step and tears because for many it’s the beginning of an empty nest. Yet, there’s a going-away-to-college question that far too few parents ask or even contemplate: What will my youngster learn in college?

The American Council of Trustees and Alumni provides some answers that turn out to be quite disturbing.

The organization evaluated every four-year public university as well as hundreds of private colleges and universities. That’s more than 1,100 institutions that enroll nearly 8 million students, more than two-thirds of all students enrolled in four-year liberal arts schools nationwide. The American Council of Trustees and Alumni’s findings were published in its report “What Will They Learn? 2018-19.”

It turns out that less than half of the schools studied require courses in traditional literature, foreign language, U.S. government, or history and economics.

Colleges often do not live up to their own promises. In college mission statements, as well as their course catalogs, they frequently exalt the virtues of a “well-rounded” liberal arts education.

The reality is something different with only 68% of the schools the American Council of Trustees and Alumni surveyed requiring three or fewer of the seven core subjects. Their curricula poorly represent critical subjects such as U.S. history, economics, and foreign languages.

The list of schools that received the organization’s “A” grades includes Pepperdine and Baylor, known for their commitment to the liberal arts and academic excellence. But there are some lesser-known colleges such as Christopher Newport University, Colorado Christian University, Kennesaw State University, Bluefield College, and Regent University that deserve accolades.

For example, Yale doesn’t require college-level math courses; Harvard accepts an elementary-level foreign language study; and Brown has an “open curriculum,” which means students may take whatever classes they want, without strict requirements.

Even though some of the best-known colleges earn poor marks for their general education curricula, it doesn’t necessarily mean they do all things poorly. A student can get an excellent education at these schools if classes are chosen wisely.

There’s another college-related issue not given much voice and that’s how important is a college education in the first place. That’s an issue raised by a Market Watch article, “Half of young Americans say their degree is irrelevant to their work.”

Parents think a college education is necessary for success. Their youngsters think differently.

According to the TD Ameritrade study, 49% of young millennials said their degree was “very or somewhat unimportant” to their current job.

The Federal Reserve Bank of New York, in an October 2018 report, found that many students are underemployed, filling jobs that can be done with a high school education. More than one-third of currently working college graduates are in jobs that do not require a degree, such as flight attendants, janitors, and salesmen.

The bottom line for parents and their youngsters is that spending four or more years in college and accumulating tens of thousands of dollars in debt is not the only road to a successful life.