Is the Navy’s Submarine Missile Program Going Down the Tubes? 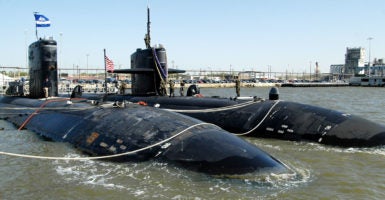 Soon only one producer may make missile tubes for the Navy. Pictured: The USS Newport News, right, secures itself next to its sister Los Angeles-class submarine, the USS Boise, after returning April 23, 2003, to Norfolk Naval Station. (Photo: Mike Heffner/Getty Images)

The defense industrial base is at risk of losing another industrial partner, potentially leaving the submarine missile-tube sector with only a single producer.

BWX Technologies is threatening to reallocate its industrial capacity to other programs.

The loss of BWX, a company that produces the tubes for Columbia-class and Virginia-class submarines, from the tube-making business would deliver a consequential blow to the stability of those Navy programs and to the health of the military industrial base overall.

The fragility of the defense industrial base in its current state is highlighted by welding flaws identified last August on BWX missile tubes for Virginia-class and Columbia-class submarines.

The faulty welds were discovered prior to delivery. According to Chris Dumond, a BWX spokesperson, the Navy has stated that the projected delay in delivery does not equate to a delay in delivery of the submarines.

Nevertheless, any potential delay in these programs can hardly be afforded when considering how we might counter the ever-expanding Chinese and Russian navies.

The U.S. Navy is focusing on advancing the lethality of its submarines and increasing its overall fleet size, and both the Virginia and Columbia programs are crucial pieces of the puzzle.

Slated to produce three of the four tubes for the Virginia-class payload module, BWX is working under General Dynamics, the prime contractor for the program. The fourth tube is being produced by BAE Systems.

The Columbia ballistic-missile submarine program, the Navy’s No. 1 acquisition priority, is still working to repairs its missile tubes.

A potential decrease in the numbers of suppliers to the shipbuilding industry raises serious concerns about the future progress of the Virginia and Columbia programs, given the small number of qualified manufacturing companies.

In fact, the Pentagon’s 2018 report, “Assessing and Strengthening the Manufacturing and Defense Industrial Base and Supply Chain Resiliency of the United States,” highlights the shipbuilding industry as having experienced some of the worst effects of reduced competition among suppliers.

The report also notes that this boom-and-bust cycle “result[s] in longer construction times and increased costs.”

Each time a shipbuilding program’s timeline is delayed, the Navy’s goal of a 355-ship fleet becomes that much further from being accomplished. Moreover, increased production costs mean that the Navy will be unable to procure ships at an adequate scale.

That reality has created inconsistency for shipbuilders’ profits, forcing them to make tough decisions about the future of their business.

Geveden, BWX’s president and CEO, puts it bluntly: “We’re not interested in the future orders unless we do have a way to make money on these orders.”

Geveden’s sentiment is echoed throughout the defense industry. These companies cannot economically justify keeping their doors open out of sheer patriotism alone.

Inconsistent funding and underfunding continue to hamstring the defense industrial base and jeopardize the future of new entrants into the defense market.

The Navy’s goal of procuring one Columbia-class sub and two to three Virginia-class subs per year certainly could be at risk if the current industrial base cannot sustain that rate of production.