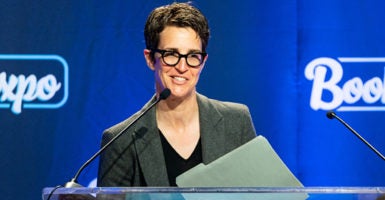 A White House lawyer nominated for a federal judgeship sharply defended himself Friday from accusations based on a 2010 law review article that he, the son and grandson of Jewish immigrants, is an advocate of “racial purity.”

“I take seriously the role of the United States as a nation of immigrants and of Israel as a home for the Jewish people, both of which are important because of suffering that has been caused by ethnic nationalism,” Menashi, currently a senior associate counsel to the president in the White House, said in an email obtained by The Daily Signal.

A former acting general counsel at the Department of Education, Menashi noted that his father was an Iraqi Jew born in Iran and his mother’s parents were Jewish refugees from the Soviet Union.

Some on the left, particularly MSNBC host and commentator Rachel Maddow, zeroed in Thursday on the focus of Menashi’s 2010 article on “ethnonationalism.”

Maddow called passages in the article a “highbrow argument for racial purity.”

The 66-page article, titled “Ethnonationalism and Liberal Democracy,” appeared in the University of Pennsylvania Journal of International Law.

In it, Menashi defended Israel’s status as both a Jewish state and a liberal democracy, contending that ethnic diversity is not a precondition for liberalism. The article did not oppose ethnic diversity.

Menashi previously was an assistant law professor at George Mason University in Virginia, where he taught courses in administrative law and civil procedure.

Before that, he was a partner at the law firm of Kirkland & Ellis in New York. He was a research fellow at the New York University School of Law.

Menashi is a former law clerk to Supreme Court Justice Samuel Alito and a graduate of Stanford University Law School, where he was senior articles editor of the Stanford Law Review.

The attacks against Menashi are misguided and dishonest, Thomas Jipping, deputy director of the Meese Center for Legal and Judicial Studies at The Heritage Foundation, told The Daily Signal.

“The attacks against this superbly qualified nominee are not only misguided, they are dishonest,” Jipping said. “Steve Menashi’s critics simply aren’t telling the truth about his past work and are trying to mislead the American people about the kind of judge he will be.”

Carrie Severino, general counsel for the Judicial Crisis Network, tweeted about Maddow: “Had she actually read his law-review article, she would know that Menashi says the exact opposite of what Maddow claims. Intentional distortion?”

This article was updated to remove a statement attributed to Menashi.