This Sheriff Was Sued for Cooperating With ICE. Now, He’s Vindicated. 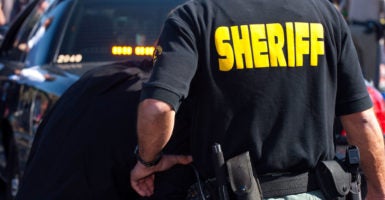 What should we do with illegal aliens who break local criminal laws?

Most people would agree that, once they’ve served their time, they should be removed from the country rather than sent back into the community where they can commit more crimes.

But the Legal Aid Justice Center of Falls Church, Virginia, disagrees. So when Culpeper County Sheriff Scott Jenkins turned Francisco Guardado Rios over to the Department of Homeland Security, the center filed a class-action lawsuit against the sheriff, claiming his actions violated the Fourth and 14th Amendments to the Constitution.

Thankfully, a federal judge has now thrown out that suit. Here’s how it went down.

In August 2017, Rios was arrested for driving without a license and contributing to the delinquency of a minor. The Culpeper County Jail then received a detainer from U.S. Immigration and Customs Enforcement and an administrative arrest warrant for Rios from the Department of Homeland Security, as there was “probable cause to believe Rios was a removable alien.”

The detainer asked the jail to notify ICE at least 48 hours before Rios’ release, and requested that the jail also maintain custody of the alien “for a period NOT TO EXCEED 48 HOURS beyond the time when he/she would otherwise have been released from custody to allow [the Department of Homeland Security] to assume custody.”

Further, the administrative warrant directed immigration officers to arrest Rios and take him into custody “for removal proceedings under the Immigration and Nationality Act.”

Rios was convicted of contributing to the delinquency of a minor. After serving his sentence in the Culpeper County Jail, he was held for an additional two days by Jenkins before being turned over to ICE agents.

Rios claimed that being held in custody after completing his sentence violated his constitutional rights. He alleged that Jenkins had held nearly 100 other illegal aliens past their release dates in 2017 and 2018, based on ICE detainers.

A key factor was the 4th U.S. Circuit Court of Appeals’ 2013 ruling in Santos v. Frederick County Board of Commissioners. The court held that state and local authorities can’t arrest or detain an illegal alien based solely on an immigration charge “absent federal direction or authorization.”

The judge noted that Rios was arrested for committing a local crime, not an immigration violation, and that Homeland Security had, indeed, provided the sheriff with specific “federal direction” and “authorization” to detain him.

Further, he observed that no federal court of appeals has “held that it would violate the Fourth Amendment to comply with an ICE detainer and administrative warrant.”

Rios’ lawyers argued that Culpeper County could not comply with a detainer warrant because it had no written agreement with Homeland Security (such as exists under the 287(g) program) to do so.

Under the 287(g) program, local law enforcement can enter into a “memorandum of agreement” with the Department of Homeland Security to assist the agency in identifying and detaining illegal aliens. Homeland Security then provides training and other resources to the local agency.

But Conrad rejected that argument, too. Even without a written agreement, he said, “local law enforcement officials may cooperate with ICE in the detention or removal of aliens not lawfully present in the United States … when such cooperation is expressly ‘request[ed]’ or authorized by ICE.”

Further, Conrad stated, Rios and other detained illegal aliens have no claim under the 14th Amendment because “the due process clause is not the proper lens through which to evaluate the validity of Rios’ continued detention at the request of ICE. ‘Compared to the ‘more generalized notion’ of due process, the Fourth Amendment ‘provides an explicit textual source of constitutional protection.’”

Rios’ final claim was that he was “falsely imprisoned in violation of Virginia law.” Because Conrad held there was no federal cause of action, he declined to exercise jurisdiction over this state law claim. Instead, he dismissed that claim without prejudice, meaning that Rios can file a new lawsuit in state court making that claim, if he wishes to do so.

When local jurisdictions refuse to cooperate with federal immigration authorities, they create de facto sanctuaries for criminals like Rios. It makes no more sense to release those aliens back into the community than it would make sense to release a convicted criminal who is a U.S. citizen but who is wanted in another state or by federal authorities.

For Jenkins, job No. 1 is safeguarding the citizens of Culpepper County. Providing sanctuary to criminal illegal aliens isn’t in the job description.