Pro-Life Movie ‘Unplanned’ Hits No. 1 Among DVDs on Amazon 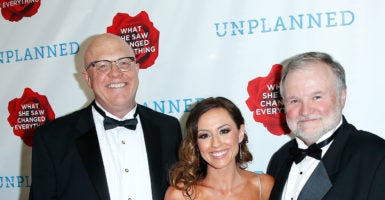 “Unplanned,” a movie about an abortion clinic director who left her job at Planned Parenthood, is the No. 1 DVD in Amazon sales after surpassing expectations in movie theaters.

“You know, without being trite, I think the people have spoken,” Cary Solomon, who directed the movie with Chuck Konzelman, told The Daily Signal in a phone interview Tuesday.

“Unplanned” tells the true story of Abby Johnson, a Planned Parenthood clinic director who quit her job with the nation’s largest abortion provider in 2009 after having a conversion experience regarding the procedure.

The movie, which stars Ashley Bratcher as Johnson, grossed $19 million in theaters over 19 weeks, according to Box Office Mojo.

Solomon said the news that “Unplanned” became Amazon’s top-selling DVD for its official release Tuesday is especially gratifying given “suppression” of the movie by mainstream media and social media in an attempt to “damage” it during the initial run in theaters.

Obstacles to the movie’s success included its “R” rating from the Motion Picture Association of America and censorship on social media.

“What does that say?” Solomon asked. “It says that we have a nation that is hungry for stories about life, but not only that [but for] true stories that reveal the truth.”

When we began, we were very concerned, very worried, very scared, and we had a Holy Spirit moment: The Spirit dropped on us and basically said, ‘Do not be afraid. This is for my glory.’ And I know that thousands of people maybe won’t believe that, but that is exactly what happened.

Konzelman, Solomon’s co-director, told The Daily Signal that he has been pleasantly surprised how well the film has done despite the opposition encountered.

“We just were kind of amazed every day,” he added.

Bratcher tweeted Thursday about the development.

The official Twitter account for “Unplanned” chimed in: “No promotion. No ads. We’ve barely mentioned our DVD release on social media.”

The film arrived Tuesday on DVD, Blu-ray Disc, and streaming on demand on Amazon Prime Video.

“Number one bestseller on Amazon,” Johnson exclaimed in a Facebook post days before the home video release. “And it hasn’t even released yet!!! Go purchase yours now on Amazon, Walmart or [get] an autographed copy through our store at www.abortionworker.com.”