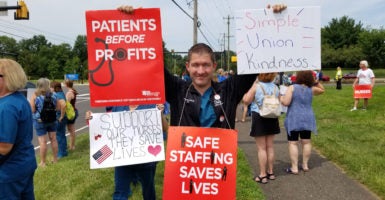 Robert Bozek, a cardiac critical care nurse, says he didn't start out as a union supporter but the “voice of nurses" needs to be stronger at St. Mary Medical Center in Langhorne, Pennsylvania. (Photo: Kevin Mooney/The Daily Signal)

MIDDLETOWN, Pennsylvania—Staffers who took down pro-union signs posted without authorization in their hospital were injured by staples “turned around backward” and “held in place by mustard,” nurses say.

The nurses, who spoke with The Daily Signal about a union rally last week near the entrance to St. Mary Medical Center in Langhorne, Pennsylvania, said the way the signs were put up was deliberate.

“This was meant to injure anyone who took down the signs,” said one nurse, who asked not to be named. “We are having union propaganda plastered all over our walls and slid under our doors.”

“Union officials are also visiting nurses at their private homes,” the nurse said. “There’s a lot of coercion and a lot of efforts made to intimidate.”

The accusation that union posters were hung in a way meant to injure anyone is “false and defamatory,” a union spokesman told The Daily Signal.

For the past several months, union posters and signs have been hung on walls and doors at St. Mary’s as part of a larger effort to prod nurses into joining a union, an official with Trinity Health, the hospital’s parent company, told The Daily Signal on background.

“We certainly could file a labor complaint, but instead we decided we wanted to avoid a protracted legal battle. And we wanted the nurses to make their own decision about whether to join a union,” the Trinity Health official said.

“Rather than tolerating these union tactics and the constant intimidation of employees who may not want to join the union, we petitioned the National Labor Relations Board to hold an election, and they accepted our petition,” the official said.

Not every nurse in the proposed bargaining unit of roughly 800 at the hospital who agreed to be interviewed wants to join the Pennsylvania Association of Staff Nurses and Allied Professionals, a union that already represents more than 8,000 nurses statewide.

But every nurse at the hospital will have an opportunity to vote up or down on joining the union in a two-day election Aug. 22 and 23.

“I’m very happy with the way St. Mary’s is being run,” Kat Ireland, one of about 14 nurses at the rally who identified themselves as “pro-hospital,” said in an interview.

“We have a great hospital, and contrary to what the union might say, our ratios of nurses to patients is actually very reasonable,” Ireland said. “I’d say it’s a 4-to-1 ratio here. But in other hospitals, it’s more like a 5- or even 6-to-1 ratio.”

The nurse-to-patient ratio and the level of staffing at St. Mary’s were major topics of conversation during the rally.

“I’m disappointed the politicians who are here to take part in the rally did not reach out to the nurses who are pro-hospital,” the Trinity Health official told The Daily Signal. “What they want is a photo-op and a publicity stunt. But they are supposed to represent all of their constituents, and this would include nurses who do not want to be unionized.”

While addressing the crowd, Santarsiero said Trinity Health had been cutting back on staffing levels to the point where patients were not receiving the traditional quality of care.

The state senator criticized Trinity Health for bringing in what he derided as a “union-busting” law firm, Yessin and Associates, from Tampa, Florida.

“Nurses are entitled to a fair process,” Santarsiero said at the rally. “This is about a fight for nurses who are fighting for all of us to make sure people get the level of care they deserve.”

The Daily Signal sought comment from the Pennsylvania Association of Staff Nurses and Allied Professionals. Mark Warshaw, the union’s director of organizing, acknowledged the inquiry but deferred to the pro-union nurses who attended the rally.

After The Daily Signal pressed for comment, specifying accusations that the union purposefully made it painful to take down pro-union posters and visited hospital employees at home, a spokesman responded by email:

Any charges that the union is attempting to injure people (by using ‘mustard’ or turning staples backwards) who take down posters is false and defamatory.

He did not address the claims of intimidation tactics.

About 40 union supporters appeared to attend the rally, including nurses, hospital staff, and elected officials.

DiGirolamo, sponsor of a bill to set a “minimum ratio of patients to nurses,” told the crowd that he supported the “constitutional rights” of nurses to choose whether they wanted to be part of the union.

“Let us choose,” the Republican lawmaker said repeatedly as he invited the crowd to join in a chant.

On the subject of fair union elections and good working conditions, Trinity Health maintains that St. Mary’s is on solid ground.

“We are the ones who called for the election, not the union,” the Trinity official said. “The union has made a lot of promises that they can’t deliver on. There’s a lot of misinformation out there about this process. Our ability to be flexible with our employees will end once a union becomes the exclusive agent. There will be very little we can do without involving the union.”

Lawrence Brilliant, president of St. Mary’s, told The Daily Signal that the hospital consistently has received high marks for performance and patient service.

Brilliant, the first physician to be named as the hospital’s president, assumed the post in November. He expresses concern that the union could undermine the hospital’s ability to provide superior services.

“What we want is the person with the best skills taking care of our patients,” Brilliant said. “We don’t [want] these decisions based just on seniority.”

But nurses who intend to vote in favor of joining the union insist that Trinity Health has mismanaged St. Mary’s.

“In 2018, our hospital made $55 million for Trinity,” Donna Halpern, a cardiac clinical care nurse, said at the rally. “Yes, $55 million. Yet instead of spending this money on patient care by hiring additional nurses and staff, Trinity has wasted tens of thousands of dollars on a union-busting firm, Yessin and Associates.

“Every day and every night, they pull us from our patients. Trinity does not want nurses to have a seat at the table when patient-care decisions are made. Rather, they prefer a board of nonmedical professionals to dictate and make vital decisions,” Halpern said.

In response, Trinity Health questions the health care expertise of union organizers who come from “non-health care unions” such as the American Federation of State, County, and Municipal Employees and the United Automobile Workers.

Hahnemann University Hospital, formerly located in Center City, Philadelphia, was organized under the union. But it is closed now, leaving the union “a huge budget gap,” the Trinity official said.

Terry Leonhardt, a nursing assistant, said she would prefer to stay out of the union. She attended the rally but joined with other nurses who held up signs expressing support for hospital leadership.

“I’m pro-hospital,” Leonhardt said. “I’m not sure what the union would be able to change in terms of how we would do our jobs, but I do know one thing that would change. … [W]e would have to start paying the union.”

The Daily Signal asked Santarsiero whether he had reached out to hospital management.

“We sent a letter to the hospital, and we received a letter back that I thought was condescending,” Santarsiero said, referring to himself, DiGirolamo, Davis, and other elected officials.

Data on campaign donations compiled by VoteSmart.org shows Santarsiero received contributions from organized labor in the 2018 election cycle, including $12,000 from Operating Engineers Local 542; $9,000 from the International Brotherhood of Electrical Workers; and $7,500 from the Pennsylvania State Education Association.

Labor contributions to Davis include more than $77,000 from trade unions and $18,000 from public sector unions.

DiGirolamo, the only Republican state lawmaker at the rally, received more than $35,000 from labor in 2018, including $7,000 from the electrical workers and $4,000 from Plumbers and Steamfitters Local 420.

Organized labor’s donations to elected officials in Pennsylvania fit into a larger national picture. In recent election cycles, political expenditures by unions have surpassed those of other special-interest groups, according to public records.

‘Nursing Not About Politicking’

The National Institute for Labor Relations Research, a nonprofit organization, produced a study showing that labor unions spent more than $2 billion on politics in the 2018 election cycle.

The study drew from records of the U.S. Labor Department and its enforcement of federal financial disclosure requirements, Federal Election Commission expense reports by political action committees, records of so-called Section 527 committees, and other data available through OpenSecrets.org and FollowtheMoney.org.

Based on required, self-reported disclosures to the Labor Department, the study found, union officers admitted to spending $628.3 million in 2017 and $741.6 million in 2018 on “political activities.”

About 90% of campaign contributions by unions in recent years go to Democrats, according to OpenSecrets.org.

However, the Supreme Court ruling last year in Janus v. AFSCME, which struck down collection of mandatory dues by public sector unions, could diminish the ability of organized labor to spend money on political activities.

The same is true in the private sector, where right-to-work laws have gained ground.

Such laws prohibit employers from entering into agreements that make union membership and payment of dues a condition of employment. As of last year, 27 states and the territory of Guam had banned such forced unionization.

Kentucky, Indiana, Michigan, Wisconsin, and West Virginia all have become right-to-work states since 2012. But unions scored a major victory in Missouri last year when that state repealed its right-to-work law.

Robert Bozek, a cardiac critical care nurse, told The Daily Signal that he didn’t start out as a union supporter. But he says he will vote “yes” in the upcoming election because the “voice of nurses has been diminished under Trinity Health.”

Whatever the outcome of the election, one nurse in management who asked not to be identified said the union should be “called out” for its tactics.

“I don’t have a vote because I’m in management,” the nurse said. “But I will say that since [the union] does not pay the bills around here, they have no right to wallpaper the halls with union material.”

Another nurse who asked not to be identified said that, based on her previous experience with a union, she would vote “no.”

“You can’t just pull staff out of thin air,” she said. “I was in a union before, and I just feel like they take over the hospital.”

“We became nurses for a reason,” she added. “We wanted to take care of people, and that means working holidays and odd hours. Nursing is not about politicking.”