An Illegal Immigrant Shot This Dad’s Son Dead. Now He Hopes to Spare Other Parents His Grief. 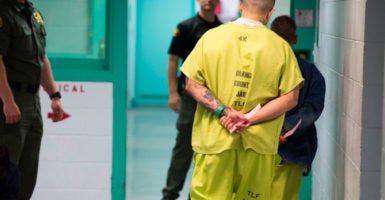 Men detained on immigration violations walk down a hall in March 2017 at a jail in Orange County, California, that houses convicted criminals as well as immigration detainees. (Photo: Robyn Beck/AFP/Getty Images)

An Arizona man whose son was shot and killed by an illegal immigrant says he doesn’t want another parent to experience the loss he still feels nearly five years later.

“It’s devastating,” Steve Ronnebeck, who lives in Phoenix, says in an interview about the loss of his son Grant, who was killed at age 21 by an illegal immigrant over a pack of cigarettes.

On Jan. 22, 2015, Grant was working the overnight shift at a QuikTrip gas station in Mesa, Arizona, two hours and 56 minutes from the border city of Nogales in northern Mexico.

Ronnebeck says an illegal alien from Mexico, identified as Apolinar Altamirano, came in at 3:45 a.m., asked for cigarettes, and dumped out a jar of change on the counter.

Grant started to count the change, but apparently not fast enough, according to a police report.

Altamirano, then 29, asked why he wasn’t giving him cigarettes, and Grant replied that he had to count the change.

Altamirano then pulled a gun, and Grant offered him a pack of cigarettes “right away,” Ronnebeck says.

“This man at that point shot Grant point-blank in the face, killing him instantly,” Ronnebeck tells The Daily Signal, citing video camera footage. “He then stepped over Grant’s body, grabbed a couple more packs of cigarettes, and walked out the door.”

His son’s murder, he says, spurred him to speak out on the threat that unrestrained illegal immigration poses to America.

Today, Ronnebeck, 52, is on the advisory board of WeBuildTheWall.us, a citizens organization working to raise awareness as well as funds for a wall along the southern border.

“I definitely have learned that I need to fight, not just for him, [but] for other people. I’m not looking to be famous,” Ronnebeck tells The Daily Signal. “I just don’t want this to happen to anybody else. And he gave me that purpose in my life.”

Ronnebeck has two other children: a daughter, now 28, and a younger son, now 19. He laments that Grant’s life ended before it truly began:

He was just starting his life. He had dreams, he had plans. You don’t really realize all the things that you miss until you start missing them. Christmas, the holidays, they’re terrible.

Ronnebeck, who is divorced, says Grant was a generous son who paid a third of household bills to help the family.

“He was just a great kid,” Ronnebeck says. “He did it without complaining or hesitating or being upset.”

Later the same day his son was murdered, Ronnebeck learned that the man accused of killing him not only was an illegal alien but had been in the country since age 14.

Altamirano had been released on a $10,000 bond shortly after being convicted on a burglary charge, AZCentral.com reported in 2015.

“He had been previously convicted of felony burglary, but what had actually happened is him and his wife and another man had done a home invasion,” Ronnebeck tells The Daily Signal. “They held a woman captive naked for 10 days, sexually assaulting her through that 10 days, filling her full of heroin, scared her so bad that she became an [unreliable] witness.”

Altamirano was allowed to enter a plea to felony burglary, Ronnebeck says:

He never did a day in prison. He had two years’ probation. He was on day 792 of his ICE [Immigration and Customs Enforcement] bond with no deportation hearing even scheduled. He was able to skirt the system. It’s a story that happens every day.

On the day of his son’s murder, Ronnebeck was working at a Pep Boys auto parts store when he got a call from his ex-wife asking if he had heard from Grant.

Ronnebeck called his son’s cellphone and didn’t get an answer, so he called the QuikTrip station, where no one answered.

His ex-wife called back and told him, “It’s on the news.”

Ronnebeck says he didn’t realize that Grant had been killed until he arrived at the gas station to survey the situation:

I got to the QT, got out of the Jeep, and was walking towards the store. One of his other managers, he had gotten out of his vehicle, and I was like, ‘Hey, where’s Grant? Where’s my son?’ And as soon as I saw him start to cry, I knew Grant was gone.

Ronnebeck says that when he lost Grant, he lost his best friend as well as his son.

“Grant had a smile that could brighten any room,” Ronnebeck recalls. “And that was from the day he was born. He just had this smile. He was a great kid, a very loving kid, all his life. He always stuck up for others. He was my best friend, and he was his little brother’s best friend.”

For those who call a wall along the southern border immoral, Ronnebeck tells The Daily Signal, he would ask why people take safety precautions in their own homes and communities: