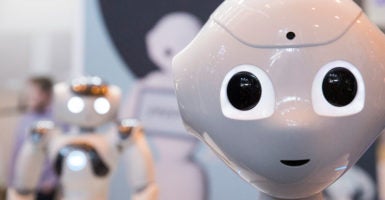 “It is amazing to see how people who had no prior interaction with robots show racial bias towards them,” says lead researcher Christoph Bartneck. Pictured: A humanoid robot at the SoftBank Robotics exhibition during the VivaTech trade fair on May 25, 2018, in Paris. (Photo: Joel Saget/AFP/Getty Images)

Americans perceive robots to have a human race corresponding to their physical features and color, according to a new study.

The study “Robots And Racism” from the Human Interface Technology Laboratory in New Zealand indicates that a robot’s color will determine how it is racially perceived. This supposedly explains why so many robots happen to be white in color: due to alleged racial preferences, the 2018 study says.

“The bias against black robots is a result of bias against African-Americans,” lead researcher Christoph Bartneck told The Next Web last month.

“It is amazing to see how people who had no prior interaction with robots show racial bias towards them,” Bartneck told CNN.

The researchers expressed concerns with this phenomenon, suggesting racial bias toward robots could pose a problem once robots become an integral part of everyday life.

“If robots are supposed to function as teachers, friends, or caterers, for instance, then it will be a serious problem if all of these roles are only ever occupied by robots that are racialized as White,” the study reads.

The study included projections of humanoid robots, colored both white and black, on a screen that participants were told to shoot at with a fake gun before the image disappeared.

The robots appeared on the screen for less than a second, and participants were instructed to shoot only at robots holding weapons.

The study involved 163 participants from the U.S., 80 males and 83 females, 126 of whom identified as white or European American. Twenty-one identified as Hispanic or Latino American, seven as black, three as Asian-American, two as Native American, and four as other, the report says. The University of Canterbury published the study.

“Human-shaped robots should represent the diversity of humans,” Bartneck said.

The Human Interface Technology Laboratory conducted a second study in January including light-brown robots among the black and white ones. In this version of the experiment, participants’ color biases virtually disappeared, CNN reported.

The “diversification of robots might lead to a reduction in racial bias towards them,” the study says.

“This leads me to believe that we have everything to win by offering racial options and nothing to lose,” Bartneck told CNN.