New Tariffs on China Will Translate to More Taxes on Americans 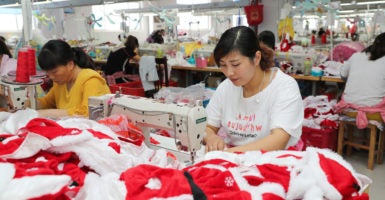 Starting Sept. 1, nearly every product from China will cost more because of those tariffs. Roughly 20% of U.S. imports come from China.

The Trump administration started applying tariffs on imports from China a little more than a year ago, in July 2018. Trump’s announcement Aug. 1 on Twitter is just one of several new taxes the administration has increased as a part of trade negotiations with China.

That’s a noticeably different basket of goods from previous products the Trump administration has taxed from China, including intermediate and industrial goods.

The announcement also comes just a month after Trump met with Chinese President Xi Jinping at the Group of 20 summit in Japan to ease trade tension, days after his negotiating team left for Shanghai to restart trade talks, and a day after Fed Chairman Jerome Powell announced an interest rate cut, citing rising trade uncertainty.

It’s clear that negotiations between the U.S. and China remain tense, and Trump has suggested he could raise the tax on $300 billion worth of goods even further, to 25%.

Unfortunately, Americans are paying for the tariffs on Chinese imports, despite what some White House advisers may claim. We end up paying more than $5 billion a month in taxes to the U.S. government when we buy imports because of tariffs, and this only will increase as taxes on imports continue to increase.

Beyond the very real cost from tariffs, there’s also a growing number of unseen costs from the trade war with China, whether it’s increasing uncertainty, loss of competitive supply chains for U.S. producers, or a loss of market share for U.S. farmers’ business in China.

U.S. businesses are uncertain about what kind of deal Washington and Beijing will make, if ever.

Meanwhile, some U.S. businesses continue to seek exemption from the tariffs or risk losing business. The Office of the U.S. Trade Representative has allowed certain exemptions from tariffs over the past year.

The process for granting exemptions, however, can be a regulatory nightmare; namely, building more government oversight than what’s really needed.

As the Trump administration moves to tax every product from China, it will require more federal employees to review exemption applications. It will also require more U.S. taxes paid to cover the costs.

And all that’s on top of all the other bloated government programs out there, including those meant to offset some of the costs from the trade war with China.

The Trump administration has dug itself into a hole with its aggressive trade negotiating tactics. And it’s only digging itself deeper.