‘Medicare for All’ Will Further Lower Physician Morale 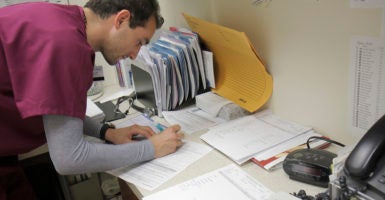 Last week, the administrator of the Center for Medicare and Medicaid Services, Seema Verma, spoke at The Heritage Foundation on the effect “Medicare for All” would have on American health care

Verma said many of current problems in the American health care system would only be exacerbated under Medicare for All, including access issues, payment inflexibility, and prohibitive regulation, all of which are great concerns for policymakers.

But one thing she said should be immediately alarming to everyone: Physician suicide has become the highest of any profession.

At the 2018 annual meeting of the American Psychiatric Association, a presented study found that the physician suicide rate was about 28 to 40 suicides per 100,000, which is more than twice that of the general population.

A researcher from that American Psychiatric Association meeting explained that physicians had unusually high rates of mood disorders, alcoholism, and other sorts of substance abuse issues.

When residents work 28 days a month and students spend their hours away from the hospital poring over hundreds of PowerPoint slides, the resulting psychological scars go deep and frequently manifest as alcoholism.

The 2018 Physicians Foundation biennial survey suggests that the cause of the sinking morale and rising suicide rate among medical professionals is that many physicians feel “their ability to do what they are trained to do, and what attracted them to medicine in the first initially (that is, care for patients) is being circumscribed by external forces.”

The external forces described include “excessive bureaucracy and regulations.”

This is not to suggest that bureaucracy is driving suicide, but the nonclinical impediments between a physician and the actual practice of medicine is straining the sense of purpose in individuals who already work in a highly stressful profession.

The American Psychiatric Association meeting devoted several sessions to addressing the growing issue of physician burnout and depressed moral. As of 2018, 78% of physicians reported feeling burnout and 80% reported working at their capacity or even beyond it.

In a survey specifically on burnout, 14% of physicians reported having suicidal thoughts, and 1% reported attempting suicide.

The leading contributor to burnout was “too many bureaucratic tasks (e.g. charting, paperwork)” with 59% of respondents agreeing.

The second and third leading contributors were “too many work hours” and “increasing computerization of practice (EHRs.)”

These were all mentioned specifically by Verma as barriers that the government places between physicians and their patients.

For instance, the government has mandated the use of electronic health records systems, or EHRs, to document clinical encounters by computer. As a result of this mandate, doctor’s visits have become a three-way conversation between physician, patient, and computer.

Electronic health records promised to revolutionize medicine by bringing medical practice into the electronic age and for the past 10 years, under both the George W. Bush and Barack Obama administrations, government programs have promoted their use with both incentive payments and penalties of reduced Medicare payments.

The problem is that the mandated implementation of electronic health records did not consider whether physicians felt they enhanced their practice.

In fact, 36% of physicians reported that EHRs had actually detracted from the quality of their patient care, 56% reported reduced efficiency, and 66% reported electronic health records detracted from patient interaction.

Use of electronic health records was reported to be the least satisfying part of medical practice, followed by regulatory requirements and loss of clinical autonomy.

It is difficult to properly describe a spiritual problem like suicide by painting a technical picture with statistics.

Ultimately, the problem is that these highly trained individuals go through eight years of school, passing and performing numerous standardized tests, each more competitive than the last, then go through three to seven years of residency—more for subspecialty fellowships—and finally begin their careers under a mountain of paperwork that keeps them from doing what they trained to do.

Although Verma and her department are working diligently to reduce it, the bulk of administrative burden placed on medical practices comes from their office—the Center for Medicare and Medicaid Services–and it is inhibiting doctors from being doctors.

The way forward for health care should include not exacerbating these issues.

Much of the rigidity and absurdities of health care stem from the government’s influence.

The private market can adjust to medical innovation and to competitive forces, but new rules through the government must undergo a laborious bureaucratic process exposed to powerful lobbies and special interests. New rules approved by legislation? Those must pass through two highly polarized chambers of Congress.

To keep apace with medical advancements, and to have a system respond properly to patients and to doctors, health care needs to have less, not more, government intervention.

Popular proposals in the news such as Medicare for All or the creation of public options do not address the underlying issues that are driving physicians away from medical practice, or worse.

It’s a bad situation when doctors are spending over 11 hours on average on paperwork, out of their average 51-hour work week (or the equivalent of one full workday devoted to nonclinical demands).

Dramatically increasing their workload by providing taxpayer-funded coverage to all will be a disaster for both them and their patients.