As With Trump, Ocasio-Cortez’s Bid to Block Twitter Users Likely to Lose in Court 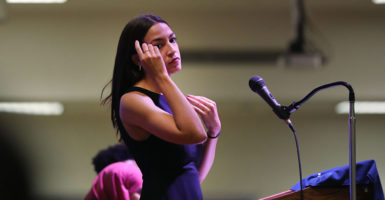 Rep. Alexandria Ocasio-Cortez, D-N.Y., is in a court battle over whether she can block Twitter users from following her account. (Photo: Spencer Platt/Staff/Getty Images)

Christina Eastman is a member of the Young Leaders Program at The Heritage Foundation.

Rep. Alexandria Ocasio-Cortez, D-N.Y., laid out her defense Wednesday to a lawsuit aimed at stopping her from blocking unwanted followers from her personal Twitter account.

The lawsuit arises out of a similar one that President Donald Trump lost last month.

In the case against the president, the 2nd U.S. Circuit Court of Appeals held that “the First Amendment does not permit a public official who utilizes a social media account for all manner of official purposes to exclude persons from an otherwise-open online dialogue because they expressed views with which the official disagrees.”

Because Trump uses his personal account “as a channel for communicating and interacting with the public about his administration,” blocking users violates the users’ First Amendment right to participate in the “interactive space” created by the president’s Twitter account.

The broad language of the opinion is not limited to the president, and it strongly suggests that any public official within the 2nd Circuit’s jurisdiction (New York, Connecticut, and Vermont) who uses a personal Twitter account for official purposes cannot block users.

It’s no wonder then that, immediately after the opinion was handed down, three people whom Ocasio-Cortez blocked from her personal Twitter account filed lawsuits against the congresswoman in New York federal courts.

Those courts must follow the rulings of the 2nd Circuit, and its opinion applies just as forcefully to Ocasio-Cortez’s Twitter account as it does to the president’s.

The 2nd Circuit’s ruling depended in part on the fact that the president’s personal Twitter account identifies him as the “45th President of the United States of America” and includes photographs showing him engaged in official duties.

Ocasio-Cortez’s Twitter account likewise identifies her as “Congresswoman for NY-14” (the 14th Congressional District of New York) and includes photographs and videos showing her meeting constituents, conducting legislative business in the House of Representatives, and giving interviews to the media about her policies.

The 2nd Circuit also ruled against the president because he uses his personal account almost daily “as a channel for communicating and interacting with the public about his administration.” The same goes for Ocasio-Cortez.

In the past week, she has tweeted and retweeted more than 50 times on domestic and foreign policy issues and had public exchanges with members of Congress, including Sen. Elizabeth Warren, D-Mass., and Rep. Elijah Cummings, D-Md., as well as with the press and members of policy advocacy groups.

She also uses her account to monitor the public’s reactions by retweeting, liking, and replying to their tweets.

And, as with the president’s tweets, hers “produce an extraordinarily high level of public engagement,” as the 2nd Circuit will again surely recognize. Ocasio-Cortez’s tweets reach an audience of more than 5 million followers (more than seven times the population of her district), occasionally dominate the news cycle, and receive hundreds of thousands of “likes” and retweets.

Put simply, Ocasio-Cortez uses her personal Twitter account in all the same ways that Trump uses his, so under the 2nd Circuit’s reasoning, she cannot ban other people from it for disagreeing with her.

Still, she’s determined to distinguish her Twitter use from the president’s. Judging from her response to the lawsuit, her defense rests on two arguments. First, she will argue that she did not block anyone because she disagreed with their political viewpoints. That’s doubtful, but she might argue that the blocked users’ tweets were not disagreements, but harassment.

And second, she will argue that she does not use her account for official purposes.

If this is the best argument she’s got, her defense is in serious trouble.

Instead of blocking Twitter users, Ocasio-Cortez—and all other politicians—should remember that getting heckled is in the job description.

Accept it. Ignore it. Carry on.