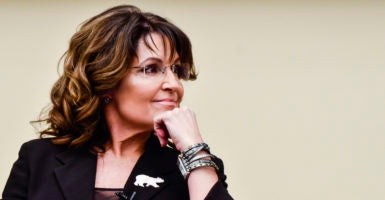 A federal appeals court gave former Alaska Gov. Sarah Palin a major victory in her defamation lawsuit over a New York Times editorial that tied her to the shooting of a Democratic congresswoman.

The 2nd U.S. Circuit Court of Appeal in New York ruled Tuesday that a lower court judge made a mistake by hearing testimony from The New York Times’ editorial page editor before dismissing the complaint. The 3-0 decision allows Palin, the Republican vice presidential candidate in 2008, to move forward with her defamation suit against the newspaper.

The lawsuit dates to a June 2017 editorial in the Times that discussed an avowed progressive activist who opened fire on a GOP congressional baseball team in 2017 and tied Palin to the 2011 shooting of then-Rep. Gabby Giffords, D-Ariz.

“In 2011, when Jared Lee Loughner opened fire in a supermarket parking lot, grievously wounding Representative Gabby Giffords and killing six people, including a 9-year-old girl, the link to political incitement was clear,” an early version of the editorial read. “Before the shooting, Sarah Palin’s political action committee circulated a map of targeted electoral districts that put Ms. Giffords and 19 other Democrats under stylized cross hairs.”

The Times received widespread backlash for the claim, with Palin calling it “sickening.”

The newspaper subsequently issued a correction and admitted no link between political rhetoric and the Giffords shooting existed. Nevertheless, Palin lodged a defamation claim later that month.

In his ruling Tuesday, Circuit Judge John Walker concluded Palin’s claim is plausible, but that she bears the strict burden of proving the paper acted with “malice” when it published the editorial.

The judge rejected the Times’ argument that Palin merely showed the newspaper made an unintentional mistake and said the paper’s quick decision to correct the editorial suggests the public may have perceived the false statements as facts.

“We are disappointed in the decision and intend to continue to defend the action vigorously,” New York Times spokeswoman Danielle Rhoades Ha said to Reuters about the court ruling.