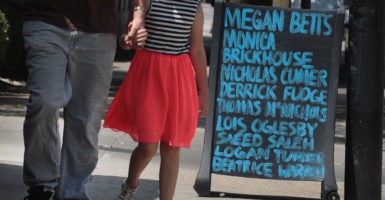 A sign with the names of those killed in the Dayton, Ohio, mass shooting sits outside of a record store in the Oregon District on Aug. 5, 2019. (Photo: Scott Olson/Getty Images)

Investigators have evidence that the shooter in Dayton, Ohio, explored “violent ideologies” prior to his attack that left nine dead early Sunday, an FBI official said, but there was no indication the shooting was racially motivated.

“We have uncovered evidence throughout the course of our investigation that the shooter was exploring violent ideologies,” Todd Wickerham, the FBI special agent in charge of the Cincinnati field office, said Tuesday at a press conference.

Wickerham did not describe the ideologies in question, Connor Betts’ social media activities appear to show he described himself as a “leftist” and expressed support for Antifa, a violent, left-wing activist group.

Betts, 24, also appeared to have said on Twitter that he would vote for Sen. Elizabeth Warren, D-Mass.

Betts reportedly arrived in the area with his sister and a male friend and wore body armor during the attack.

Wickerham said at the press conference that investigators have not determined Betts’ motive or whether he was assisted in the attack.

Crusius is believed to have posted a manifesto shortly before the shooting in which he railed against a “Hispanic invasion” of the U.S.

Authorities arrested Crusius following the attack and he faces capital murder charges. The Justice Department designated the massacre in El Paso as an act of domestic terrorism and a potential hate crime that could lead to the death penalty.

The two shootings have sparked debate over gun control, as well as the role political motivations may have played in both massacres.

Betts also had a history of misogyny and mental illness. In high school, he was expelled after compiling a list of female classmates he said he wanted to rape. One ex-girlfriend wrote in an online essay that Betts once showed her a video of a synagogue shooting.