After the Shootings: Look to Culture, Not Politics 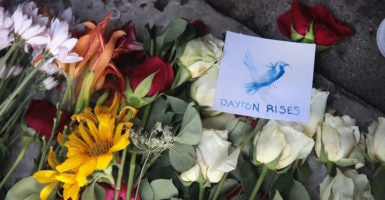 Flowers form a small memorial in front of a bar in the Oregon District following the mass shooting in Dayton, Ohio. (Photo: Scott Olson/Getty Images)

The nation must now endure another gut-wrenching tragedy, with 31 having been senselessly gunned downed in Texas and Ohio over a weekend.

This following a week where three were gunned down in California.

My appeal is to consider these tragedies a crisis of culture and not to turn them into politics, which is already happening.

I’m thinking about the words of Robert F. Kennedy when he spoke to a crowd in Indianapolis in April 1968, after hearing the news that Dr. Martin Luther King Jr. had been murdered.

“In this difficult day, in this difficult time for the United States, it is perhaps well to ask what kind of a nation we are and what direction we want to move in,” said Kennedy. He himself would be assassinated shortly thereafter.

Kennedy appealed to Americans to move away from “polarization” and “hatred” and toward “love and wisdom and compassion.”

It is a great temptation to simplify what is complex, and this tends to mean translating everything into politics, looking for some particular individual to blame, and looking for some simple policy answer that will allegedly solve the problem.

But these tragedies are not simple and not partisan.

There is a sickness in the soul of our nation, and that sickness plays its way through and winds up expressed in deadly, pathological acts of lonely, lost, confused individuals—disproportionately, young males.

We must try to grasp the nature of this pathology and consider how it may be addressed.

If we look, we can see other telling symptoms.

The Centers for Disease Control and Prevention reports that the rate of suicide in the nation is the highest since 1942.

The rate of suicide among young men is more than three times higher than that of young women.

On the other side of the spectrum, while young Americans are taking their own lives at an increasing rate, fewer are bringing new life into the world.

The CDC reports that in 2018, for the fourth year in a row, the nation’s fertility rate—the number of births per 1,000 women ages 15 to 44—dropped and hit a historic low.

And this has occurred coincidentally with a drop in the rate of marriage. The percentage of American adults who are married is one-third less than where is stood half a century ago.

All this has occurred as Christianity, once a pillar of American society, has been pushed to the margins.

Faith builds a sense of belonging to something true and greater than oneself. It provides meaning and an anchor in times of difficulty and uncertainly.

As faith and eternal truths become more marginalized, more young people, particularly young males, become isolated and left with a sense of meaninglessness. They lose the key framework through which one takes personal responsibility for his or her life.

It produces an inclination to look for others to blame for their difficulties, for their personal struggles. Sometimes it becomes violent.

There is a great price to be paid for a culture of meaninglessness.

This is what we should be thinking and talking about, rather than simple political answers and who to blame.