Pompeo Calls for US, Australia to Present United Front to China 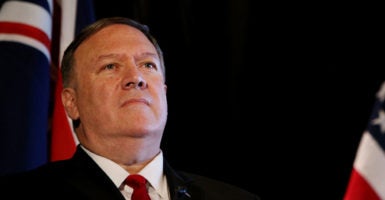 SYDNEY—The U.S.-Australia alliance is “more vital than ever,” Secretary of State Mike Pompeo said, calling on greater cooperation between the two countries to deal with a new era of security challenges as China seeks to extend its influence in the Indo-Pacific region.

“I want Australians to know they can always rely on the United States of America,” Pompeo said, adding that the U.S. is “here to stay” as a Pacific power.

Drawing parallels with the two countries’ shared history of fighting side-by-side in both world wars and the Cold War, Pompeo added: “Neither of our two countries have ever stepped away from responsibilities, even if those responsibilities required years and years of hard work and determined effort.”

The American side didn’t mince words, striking a notably hard line regarding China.

“We firmly believe no one nation can or should dominate the Indo-Pacific,” Esper, who officially assumed the office July 23, said. “We stand firmly against a distribution pattern of aggressive behavior, destabilizing behavior, from China. The U.S. will not stand by idly while any one nation attempts to reshape the region to its favor at the expense of others.”

Sunday’s meeting occurred amid the backdrop of a worsening trade dispute between the U.S. and China.

Speaking at a separate event Sunday at the State Library of New South Wales in central Sydney, Pompeo singled out Beijing’s predatory lending practices, which he said often saddle smaller nations with crippling debt for the sake of “political control.”

The secretary of state also drew a direct link between China’s economic boom and its expanding military footprint across the Indo-Pacific.

“I’ll hear folks talk about trade and economic issues as separate from national security,” Pompeo added. “Let’s make no mistake about it, China’s capacity, the People’s Liberation Army’s capacity to do exactly what they’re doing is a direct result of trade relationships that they built.”

Pompeo went on to praise Australia for its proactive opposition to China’s 5G networks—a lingering bone of contention with some European allies—as well as Australia’s efforts to thwart covert Chinese disinformation campaigns and electoral interference.

China has had a recent spate of maritime confrontations with Vietnam and the Philippines in the South China Sea, ratcheting up an ongoing dispute over freedom of navigation in that body of water after Beijing began transforming natural atolls into military outposts.

However, China’s expanding military footprint in Southeast Asia is not limited to the South China Sea. Recent news reports claimed Cambodia was harboring a secret Chinese base on its soil. Also, Chinese and Russian warplanes recently conducted a joint air operation over the Sea of Japan.

South Korean fighters reportedly fired 360 warning shots to turn back a Russian surveillance aircraft after it allegedly violated South Korean airspace. The incident spurred many experts to speculate whether a new Sino-Russian military bonhomie was on the rise in Asia.

According to a joint U.S.-Australian statement issued during the Australia-U.S. Ministerial Consultations, the two sides “expressed concern about the potential establishment of new military bases that could undermine stability and sovereignty in the Indo-Pacific region.”

The U.S. and Australia already are linked by a 1951 alliance known as ANZUS, the Australia, New Zealand, United States Security Treaty. That treaty’s mutual defense pledge was invoked for the first time in 2001, following the Sept. 11 terrorist attacks.

Today, the Australian government generally sees a beefed-up U.S. military presence in the region as a hedge against China’s expanding footprint.

U.S. Marines have maintained a rotational force based outside Darwin, in northern Australia, since 2012. Recently, the size of that force increased to 2,500 Marines, underscoring America’s long-term commitment to safeguarding the region, according to Pentagon officials.

“The days of Australia as a ‘middle power’ are coming to an end,” Pompeo said. “That’s a good thing for the region, and the world.”

Yet, some Australian officials and defense experts are asking whether the U.S. has designs on deploying missiles on Australian soil with the capacity to strike mainland China. That move would make Australia a more vulnerable military target, some say.

With its withdrawal last week from the Intermediate-Range Nuclear Forces Treaty, the U.S. has floated the possibility of deploying ground-based, medium-range missiles to the Indo-Pacific region—part of a broader effort to push back against China’s rising military footprint in the region.

“We are a consistent partner with our friends in the United States … but we’ll always make our own decisions in Australia’s national interest,” said Payne, Australia’s foreign affairs minister, during a Q&A with Pompeo following his speech at the State Library.

On Sunday, neither Pompeo nor Esper ruled out the possibility of U.S. missiles in Australia. However, Pompeo affirmed the sovereign right of any nation to make its own decisions regarding U.S. requests to deploy military forces or hardware on its soil.

“It is, of course, the case that when we deploy these systems around the world with our friends and allies we do so with their consent,” Pompeo said.

China remains Australia’s top trading partner, raising concerns from some quarters about the economic consequences of a falling out with Beijing.

Pompeo, for his part, urged Australians to look past China’s economic sway and remain committed to U.S.-led efforts to push back against Beijing on other fronts.

“Look, you can sell your soul for a pot of soybeans, or you can protect your people,” Pompeo said.