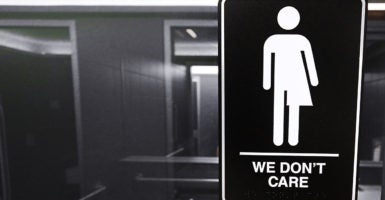 North Carolina officials have made a deal with the transgender lobby.

Last week, they reached a settlement determining whether transgender-identifying individuals can use bathrooms that match their “gender identity” in public buildings.

The settlement allows these individuals to use the bathroom of their self-professed gender identity within buildings owned and operated by the state government, including state parks and historic sites.

It’s unfortunate to see a few powerful politicians bending to the whim of a vocal, entitled minority. Their decision left out the entire legislature, and the end result is a policy that offends the privacy rights of all North Carolinians.

After months of heated debate, a federal judge said all parties agreed that nothing in a controversial state law “can be construed … to prevent transgender people from lawfully using public facilities in accordance with their gender identity.”

The settlement is in response to the original “bathroom bill,” HB2, which the North Carolina General Assembly passed in 2016, when Pat McCrory, a Republican, was governor. That bill required that people use the restrooms of public buildings according to their biological sex at birth.

The bill created national controversy, with some businesses and sports leagues (like the NCAA) deciding to boycott North Carolina over it.

In 2017, Gov. Roy Cooper, a Democrat, repealed much of the bill by signing HB142 into law. But both sides remained unsatisfied, since HB142 left state policymakers in charge of bathroom policy. It also blocked local jurisdictions from passing measures that would allow transgender-identifying individuals to use the bathroom of their choice.

The ACLU, along with a handful of transgender plaintiffs, sued Cooper and McCrory, both listed as defendants in the case, back in 2016. Cooper, then the state’s attorney general, and several other senior state officials were in favor of the settlement, while the North Carolina General Assembly opposed the consent decree.

Over time, LGBT activists, with the legal aid of the ACLU, have successfully presented the LGBT community as a marginalized group in need of not just equal protection under law, but special laws to ensure their rights usurp the pedestrian majority.

This is a classic example of just how a select few progressives can easily maneuver to supersede the rights of the elected majority and the constituents they represent.

North Carolina not only enjoyed a GOP majority in the legislature, but had already passed legislation defining the position at least half of the constituents there held on transgender bathroom issues.

A Democratic governor who was elected by a slight margin—approximately 10,000 votes—not only tanked the existing bathroom law, but agreed to grant privileges to transgender-identifying individuals despite the fact that his position is not widely held in North Carolina.

This new settlement subverts the usual democratic process by dismissing constituents and the lawmakers they elected, acquiescing to the vocal wishes of a small group of elected progressives, the ACLU, and a handful of transgender activists.

This is not only harmful to the purpose of a democratic republic, but sends a false message that the treatment of transgender individuals is so oppressive that special legislation is required to protect them.