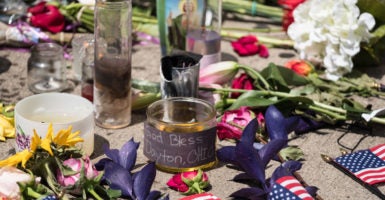 Candles and flowers are placed in front of Ned Peppers bar after the mass shooting over the weekend in Dayton, Ohio, on Aug. 5, 2019. (Photo: Megan Jelinger/AFP /Getty Images)

The shooter identified in the deadly attack early Sunday in Dayton, Ohio, appears to have had a Twitter account filled with far-left rhetoric and comments about guns.

Police said Connor Betts, 24, opened fire in downtown Dayton, killing nine, including his sister, and wounding or injuring 27 others. The attack came 14 hours after police said Patrick Crusius, 21,  murdered 22 and wounded or injured 24 others Saturday in an El Paso, Texas, shopping area.

Photographs from the Twitter account look similar to those circulating identifying Betts. One photo tweeted out is of a new tattoo, which can be partially seen from a photo used in articles about the shooting. Tweets referred to Dayton, and apparently family members had commented on some tweets.

Betts appears to identify himself as “he/him / anime fan / metalhead / leftist / i’m going to hell and i’m not coming back,” according to the Twitter account.

He tweeted about gun control and commented on past mass shootings.

Betts appears to have tweeted in 2017 talking about video games and wrote that a particular game was “underrated.”

The account also had pro-Antifa rhetoric and spoke out against fascism.

“This is America: Guns on every corner, guns in every house, no freedom but that to kill,” another tweet from 2017 read.

@iamthespookster also retweeted a photo about “Cold Boy Winter,” which showed people attacking what appears to be KKK members.

Another noted that “Warren has a decent shot.”

“I want socialism, and i’ll not wait for the idiots to finally come round to understanding,” Betts wrote, according to Heavy.

Police killed Betts within a minute of his opening fire Sunday morning as he attempted to enter a bar, according to video footage.

The now-suspended Twitter account shows a contrast from the alleged shooter Saturday in El Paso, who is believed to have had an anti-immigrant agenda. That shooter gave himself up to police and is currently in custody.

“We’re proactively removing content that violates our policies and will be engaged with law enforcement, as appropriate,” a Twitter spokesperson told The Daily Caller News Foundation.

The FBI and the Dayton Police Department did not respond to requests for comment in time for publication.