What We Lose When We Erase Thomas Jefferson 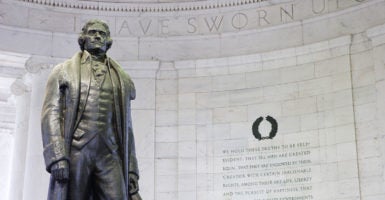 "To define Jefferson solely by his sins and moral shortcomings is to perpetuate an inaccurate and incomplete picture of the person," writes Jean-Marie Bralley. (Photo: Ericfoltz/Getty Images)

Jean-Marie Bralley is a writer based in Charlottesville, Virginia.

A college history professor once told me that rarely do we find historical figures that are all evil or all good. Most are a mix.

It’s a thought that has stuck with me, one seemingly self-evident and yet easily overlooked in these days of excessive labeling and pigeonholing of everyone.

I believe it’s a sentiment that needs reviving in our current national discussions about the removal of statues, paintings, memorials, etc., that honor certain historical figures.

As a native of Charlottesville, Virginia, I was disheartened by the July 1 decision of the Charlottesville City Council to cease celebrating Thomas Jefferson’s birthday as a holiday. The decision was reached because of his association with slavery and the fact he allegedly fathered children with one of his slaves, Sally Hemings.

Not that Jefferson’s birthday is a holiday that particularly affected me or probably many other residents of Charlottesville. Until this dust-up, I was not aware that his birthday was a city-wide holiday.

Nevertheless, it’s the principle of the matter. We all know Jefferson was a man of contradictions. The late, respected columnist Charles Krauthammer called him “The Sublime Oxymoron.”

Jefferson owned slaves, yet penned the Declaration of Independence, which states all men are created equal. In an early draft of the revolutionary document, he included a clause that condemned slavery, and he was vexed when Congress removed it.

This decision by Charlottesville’s City Council is the latest example of controversy arising over matters associated with the time of slavery.

Slavery was a blight on our nation. It’s a part of our history that will always need to be handled with honesty and sensitivity, but downgrading or eliminating celebrations of the Founding Fathers is not a constructive way to go about it. Rather, it only furthers division and rancor.

To define Jefferson solely by his sins and moral shortcomings is to perpetuate an inaccurate and incomplete picture of the person. We need to know the whole person—foibles and failings—not just to point fingers or cast judgment but to learn lessons and gain understanding of the person and of the historical time and culture.

This certainly also should include studying the subject’s achievements and positive contributions to the world.

In Jefferson’s case, the contributions were monumental, and we are still reaping the benefits.

Per his request, three of Jefferson’s achievements are carved into his tombstone at his home, Monticello: “Here was buried Thomas Jefferson Author of the Declaration of American Independence, of the Statute of Virginia for religious freedom & Father of the University of Virginia.”

According to Monticello’s website, he said, “Because by these … as testimonials that I have lived, I wish most to be remembered.”

All Americans are recipients of the blessings of a nation founded on the values and rights espoused in the Declaration of Independence. That is something to be celebrated.

All Americans are free to follow their consciences and to seek the truth in religious matters without coercion or interference by the government. That is something to be celebrated.

People of all races and nationalities are the beneficiaries of Jefferson’s academic and intellectual legacy at the University of Virginia. That is something to be celebrated.

A celebration of or memorial for a person does not necessarily equate with commendation of every choice or belief of that person.

On a practical level, Charlottesville benefits monetarily from Jefferson’s legacy. Think of the revenue generated from the presence of such a large public university as the University of Virginia, not to mention the tourists who visit nearby Monticello. To remove Jefferson’s birthday seems almost to thumb one’s nose at a benefactor.

Council member Kathy Galvin, who was the only “no” vote on this holiday removal, acknowledged Jefferson’s many contributions and said, “Doing away with Thomas Jefferson’s birthday doesn’t do away with the history. … That birthday is still here. What he has done in the past is there.”

The Charlottesville City Council voted separately and unanimously to designate Mar. 3 as Liberation and Freedom Day, a holiday commemorating Union troops marching into Charlottesville during the Civil War.

At the same time, it also has installed a floating holiday to keep 12 holidays per year. Why not keep Jefferson’s birthday as that 12th holiday?

Councilor Wes Bellamy said, “You literally can’t go anywhere within our city without hearing or seeing a reminder of Thomas Jefferson.”

Yes, Jefferson is a powerful local presence, and, as Galvin said, the history is still there. Doesn’t it make sense to celebrate the birthday of the man who shaped that history?

Any way you slice it, this recent decision seems to be one more step down the proverbial slippery slope of political correctness involving our history.

Moreover, the timing of this decision could not have been worse, a further slap to Jefferson’s legacy, coming just a few days before the Fourth of July, when we celebrate the signing and adoption of the Declaration of Independence and also the day Jefferson died.

It’s time we all heed my professor and remember that the vast majority of people, both living and deceased, are and were neither wholly hero or villain but fall somewhere in between with both virtues and vices.

Let’s celebrate the virtues and be grateful for what we inherited. Here’s hoping our third president gets his birthday celebration reinstated.