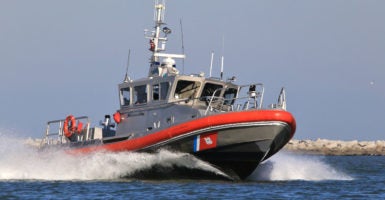 The Coast Guard reported the seizure of seven semi-submersible vessels between the months of June and September of 2017. (Photo: Douglas Sacha/Getty Images)

A dramatic video depicting the Coast Guard’s seizure of a drug-smuggling semi-submersible vehicle back in June has since gone viral.

The operation resulted in the confiscation of more than 16,000 pounds of cocaine after a Coast Guardsman leaped onto the submarine in choppy eastern Pacific Ocean waters.

Vice President Mike Pence applauded the success of “this momentous occasion and this historic offload.” The video has drawn attention to a unique issue facing U.S. efforts to combat drug smuggling—namely, low-profile vessels.

In recent years, the Coast Guard has reported an increase in the use of semi-submersible vessels in drug-smuggling operations. That particular style of vessel rests just below the water, hidden from view, and is difficult to track as they are built to deter detection by radar, sonar, and infrared systems.

The Coast Guard reported the seizure of seven of these vessels between the months of June and September of 2017. However, it’s estimated that it only detects and intercepts 11% that pass through the eastern Pacific, most in known drug-transit zones off the coasts of Central and South America.

Most originate with Colombian drug cartels, which build them in the jungles to avoid detection. They are thought to cost about $2 million to build, are typically constructed of fiberglass, and are propelled by a diesel engine. Most take upwards of a year to build.

Successes like the interception depicted in the video are only possible when the Coast Guard has sufficient numbers of ships, aerial assets, and other tools. All of these things require long-term, consistently adequate funding, and that’s something that has not always been the case for the Coast Guard.

Unlike the other branches of the military, the Coast Guard is not funded within the Department of Defense, but rather through the Department of Homeland Security. That poses certain challenges, including a lack of pay for employees during government shutdowns.

Additionally, requests for appropriations to build the bare-minimum fleet—the so-called program of record—were often denied in the past decade, constricting the Coast Guard’s ability to revamp its aging fleet and perform its duties to the highest degree of efficiency.

Thankfully, the past few years have seen a start to the reversal of this trend, but even then, Coast Guard studies have shown that the program of record encompasses just the absolute essentials. There are many missions that require more resources than the program of record provides if we are to address today’s threats.

The Coast Guard is trained and prepared to carry out its mission, such as that drug bust, but the lack of sufficient resources can limit the frequency and scope of such operations.

To better protect the U.S., the Coast Guard must update its fleet requirements. It’s then up to Congress to provide adequate funding so it can fulfill its promise of promoting maritime safety and security.