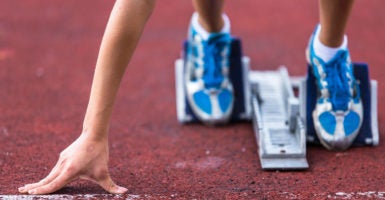 “Equal participation in athletics for transgender people does not mean an end to women’s sports,” the ACLU says. (Photo: Westend61/Getty Images)

The ACLU is leading a petition campaign in support of two male athletes, Terry Miller and Andraya Yearwood, who are dominating high school girls track in Connecticut. “While Andraya and Terry’s teammates and coaches support them, some cisgender athletes want to keep them out of girls’ sports,” the petition states.

“Equal participation in athletics for transgender people does not mean an end to women’s sports,” the ACLU wrote in a tweet on Tuesday promoting the campaign. “Trans women are WOMEN.”

One of Miller and Yearwood’s female competitors, Selina Soule, has repeatedly criticized forcing girls to compete against male athletes. “Currently, in Connecticut I am the only girl who is speaking out,” she said last month. “Everyone else is too afraid.”

The Connecticut runners are just two of several examples of biologically male athletes racking up victories in women’s sports.

A recently published paper in the Journal of Medical Ethics found that suppressing testosterone levels in male athletes isn’t enough to eliminate their natural advantages over female athletes.

The paper concluded that male athletes who identify as transgender women have an “intolerable” advantage over their female competitors.

A spokeswoman for the ACLU declined to comment, recommending instead that The Daily Caller News Foundation reach out to liberal academics who support including biological males in female sports.