When Debt Becomes a Life Sentence 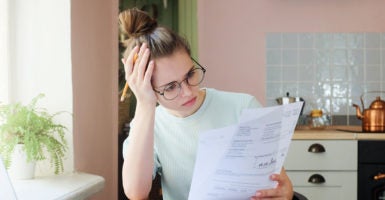 More than half of all millennials "don't know when, or if, they'll ever be able to pay off what they owe," according to a CNBC report. (Photo: Damir Khabirov/Getty Images)

Debt is quickly becoming a new form of modern slavery in this country. With people becoming increasingly more willing to spend on consumer items and lifestyle enhancements before they actually earn the money, debt is increasingly common.

To be clear, there is both good and bad debt.

Good debt is the use of leverage to invest in a business or acquire new skills that can increase one’s earning capacity well beyond the cost of borrowing. Bad debt is using borrowed money to fund current expenses and lifestyle choices like vacations, clothing, and nights out on the town, and declining assets like cars and home appliances.

Since the Great Recession, many Americans should have been forced to cut back on their lifestyle spending because they were earning less income. But instead of tightening their belts, all too many people have chosen instead to finance lifestyle with debt.

That debt, in the form of credit cards and home equity loans, often comes at an exceedingly high price. Even borrowing for educational purposes has become a victim of lifestyle extravagance.

Student loan debt eclipsed all other forms of debt except for mortgage debt for the first time in 2018. According to Bloomberg, student loans surpassed home equity revolving debt, car loans, and even credit card debt in the aftermath of the Great Recession.

The reasons for this are myriad, but can mostly be attributed to the fact that other traditional forms of debt have become highly regulated, whereas student loan debt, most of it in the form of government subsidized and/or guaranteed loans, has become the new credit card.

As of last year, “Overall consumer debt reached a record $13.5 trillion,” Bloomberg reports, while student loan debt ballooned to a record $1 trillion. This begs the question: Did the students who borrowed over $1 trillion receive educational benefits that enable them to repay that amount?

The data suggests that the answer is no.

According to an article published by CNBC, the average millennial (classified as ages 18 to 34) “had about $36,000 in personal debt, excluding home mortgages, last year.”

Furthermore, more than half of all millennials (classified as ages 18 to 37) “don’t know when, or if, they’ll ever be able to pay off what they owe.” Almost 20% of those expect to die with some form of debt.

For them, debt has become a death sentence. But it doesn’t have to be this way. In fact, it should not be this way.

These assumptions about future earnings are almost always wrong. We never really know today if we will be able to pay off debt tomorrow; we don’t know what challenges tomorrow may bring—whether it is some unforeseen medical expense, a death in family, being laid off from a job, or some other catastrophic occurrence. The future is simply unpredictable.

Even good debt—debt incurred to purchase a home, invest in a business, or purchase additional education and earnings—should be questioned.

It appears that during the Great Recession, many Americans tried to ride out the downturn by borrowing to enroll in expensive educational courses—in programs that not only enabled them to purchase the skills, but also paid for their lifestyles, living expenses, clothing, and housing.

That’s why, despite the increase in salaries that millennials earn from advanced education, they are still finding it difficult, and in many cases impossible, to get out of debt.

Compound grossly inflated so-called educational debt with a further refusal to rein in personal spending, and you have a recipe for disaster.

Once they have graduated with their newly minted degrees and gotten jobs, folks still insist on keeping up with the Joneses. With a high-powered consulting firm or law firm job, or with a recent medical degree in hand, they feel entitled to both look and act the part.

Thus, they go into further debt or use their income to fund their lifestyle rather than pay down their previous debt. As a result, many end up in a vicious cycle with no relief in sight.

But there is a way out.

Not only is there a way out, but there is also a way forward for those who truly want to live debt-free. It starts with aggressively disciplining one’s spending in the short term.

It requires forgoing consumer purchases, such as a new automobile, vacations, clothing, and expensive electronics, in the short term. It also requires a bit of belt tightening in the short term that in the long term leads to freedom from debt and to prosperity.

Although we all fall down from time to time, that doesn’t mean we have to die and be buried under a mountain of debt. With a little discipline and hard work, we can reap a bountiful harvest of wealth and prosperity.

We can even create a legacy to pass down to our next generation—not only a monetary legacy, but also a legacy of discipline and achievement.