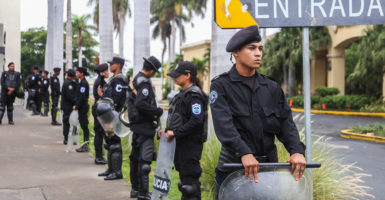 Cuba, Venezuela, and Nicaragua are named Latin America's "captive nations" in 2019, controlled by tyrannical, communist regimes. Pictured: Riot police in Managua, Nicaragua, are deployed at a shopping center to prevent a march called by anti-government protesters on May 26. (Photo: Inti Ocon/AFP/Getty Images)

As Captive Nations Week came to a close earlier this month, three nations in Latin America were still far from escaping the death grip of communist regimes.

“What we’re talking about here is not just politics and policy,” said Marion Smith, executive director of the Victims of Communism Memorial Foundation. “It’s about human beings.”

Speakers gathered on Capitol Hill for a summit July 15 hosted by the foundation in conjunction with the Department of State Ministerial to Advance Religious Freedom to share the current plight of “captive nations,” nations across the globe that are oppressed by tyrannical, communist governments.

“The source of evil is the same place,” one speaker said.

One panel highlighted Latin America, in particular, and how Venezuela, Cuba, and now Nicaragua—all under the control of dictatorial communist governments—continue to subject their citizens to unspeakable human rights abuses. All three are considered captive nations in 2019.

Cuba: ‘The Godfather’ of Captive Nations

“Cuba is kind of the godfather in all of this,” Ana Quintana, senior policy analyst in Latin America and the Western Hemisphere at The Heritage Foundation, said in an interview with The Daily Signal following the summit.

The weakening of the Latin American region, Quintana said, can be traced to the Cuban revolution of 1959 and the fall of Cuba to a communist military dictatorship.

“I could picture all those photographs in Cuba right now,” Werlau said. “But what do we see in the news? We see the old cars and the beaches. We hear news about the embargo, but we don’t see that. That’s what the [Cuban] regime is counting on, that people get tired, that people accept it, that they can manage propaganda and influence us.”

“The communist military dictatorship controls 80% of the economy,” she said. “They control the tourism industry, they control the agriculture sector, they control the most profitable sectors on the island. Every single time anyone goes there and they spend $1 at any hotel, … they are directly putting money into the pockets of these repressive government institutions.”

Though Cuba claims it is reforming with then-President Raúl Castro’s revision of the nation’s constitution in 2018, John Suarez, executive director of FREE Cuba, said changes have been merely cosmetic and “enshrine the same old problems.”

Cubans who try to protest the government, Saurez said, are subject to machete attacks, refused medical care, and told to leave the territory.

Carlos Vecchio, Venezuela’s ambassador to the United States, told summit attendees that the dictatorial regime of Nicolas Maduro created the crisis there. Vecchio was appointed to his position by opposition leader Juan Guaidó, who the U.S. recognizes as the legitimate president of Venezuela.

Vecchio shared a report by U.N. Commissioner for Human Rights Michelle Bachelet, the two-time former president of Chile, revealing how Maduro has been detaining political prisoners since as early as 2014.

Dissidents have been subject to torture, waterboarding, and exposure to extreme tempuratures, according to the report. Female prisoners are abused by intelligence officers, asked to undress, or offered protection only in exchange for sex.

“This is an independent report by the highest international authority on human rights worldwide,” Vecchio said. “That report confirmed that Maduro has violated every single right.”

Vast numbers of Venezuelans are fleeing their own country, the diplomat added, because of Maduro’s control:

After decades of being a nation of immigrants, having welcomed many of them, many who were escaping from communist regimes from Central American countries like Cuba, [Venezeuela is] now coming second to Syria in terms of humanitarian refugee crises in the world, with more than 4 million people that have escaped Venezuela to neighboring countries.

The nearby Cuban regime also exerts power over the Venezuelan people, according to a recent study on Cuban influence in Venezuela published by Werlau. She said Cuba’s effective occupation of Venezuela today is not military, but asymmetrical, affecting the country’s education and culture.

“It’s impossible to know how many communists are in Venezuela, but Cuba’s official sources, which are never reliable, have said there are at least 46,000 Cuban collaborators in Venezuela working on more than 200 projects,” Werlau said.

She described the introduction of a pantheistic religion, Santeria, into Venezuela as one tactic the Cuban government has used to make Venezuelan culture more susceptible to communism.

The speakers also shared how Cuban medical doctors in Venezuela intentionally provide faulty care to patients for the sake of “population control.”

Vecchio, however, said he remains hopeful.

“Freedom is the worst enemy of communism,” the Venezuelan diplomat said, “and that is why we must defend it every day with our action, resilience, and for future generations.”

Nicaragua: ‘The Next Venezuela’

Speaker Carlos Ponce, a research fellow and director of Latin America programs at the Victims of Communism Memorial Foundation, shared why Nicaragua is quickly becoming “the next Venezuela.”

“We hear about Cuba, we hear about Venezuela,” Ponce said. “The source of evil is the same place.”

How can you talk with somebody that is a 17, almost 18-year-old boy who was raped 17 times, because he was just protesting outside of his house? They arrested him, raped him, and then he had to flee the country and he’s now in Costa Rica.

Or, someone who was raped systematically for several years by the military? There are thousands of cases of people with stories about rape, systematic torture.

Fifty thousand people left Nicaragua and are living now in Costa Rica because of the violence of Nicaragua, because of [the] Nicaraguan regime. Because this regime is the same that is in Venezuela. Daniel Ortega himself was trained in Cuba. So it’s the same in Nicaragua.

They’re evil, they torture people. When you hear about Venezuela and when you hear people say how they use all this waterboarding—it’s the same thing that happened in Nicaragua.

In April 2018, when Ortega tried to pass an unpopular pension reform, dissidents from every part of Nicaraguan society protested, Quintana told The Daily Signal.

“It was the spark that was already coming,” Quintana said. “Ortega was already allowing China to build this canal in their country, he was oppressing the indigenous population—there was so much already going on when he tried to pass that reform that when the protests finally broke out for the first time in a very long time, the government reacted brutally.”

“Literally: They started slaughtering student protesters on the street,” she said.

The Nicaraguan government threw over 800 people in jail after April’s protests, Ponce said. Some 1,200 Nicaraguans disappeared, and 50,000 have emigrated to Costa Rica since that point. The government killed over 800 protesters.

Ponce and Quintana detailed how college students were taken into custody and sexually assaulted, an occurrence that is commonplace and continues today, over a year later.

Ponce noted that the weapons carried by the Nicaraguan military are the same weapons that both the Venezuelan and Cuban military dictatorships use, purchased from China and Russia. Cuba has asked to be involved in the negotiations to help solve the crisis in Nicaragua, an idea at which Ponce scoffed.

“Thank you, Carlos [Vecchio], for pointing out that allowing Cuba into any sort of negotiations about Nicaragua and Venezuela is like allowing the fox into the hen house,” Quintana said. “It makes no sense.”