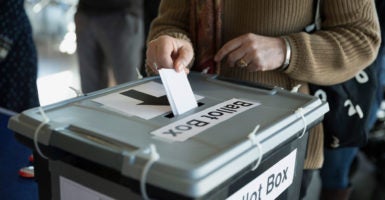 Americans don’t want socialism and the policies pushed by the left, such as government-run health care, a series of polls commissioned by Heritage Action for America has found.

“Our goal was simple: To find out what issues currently motivate the coalition that elected Donald Trump and Republican congressional majorities in 2016, so that we can keep that coalition together and expand it while simultaneously advancing the conservative ideas we hold dear,” Tim Chapman, executive director of Heritage Action, wrote in an op-ed for Politico Magazine.

“We found that the GOP isn’t connecting the dots between its own innate conservative principles and voters’ preferences—which, our polling reveals, are more similar than many realize.”

The polling found that 70% of participants say they reject single-payer health insurance, 65% oppose socialism, and 63% see the immigration situation on the southern border as a “national emergency.”

“In the case of Medicare for All,” Chapman wrote, “Republicans should argue that it would create a one-size-fits-all government-run program for normal folks, while the rich will find other ways to get better care.”

The polling commissioned by Heritage Action, the lobbying arm of The Heritage Foundation, identified immigration as the single biggest issue across every demographic group. Chapman wrote:

But the reasons voters gave for immigration’s importance weren’t what you’d expect—at least not if you listen to the way the issue is often discussed.

On the one hand, 83 percent of Republican voters said that ‘illegal immigration affects my life,’ including strong majorities of working-class and suburban voters. Yet when asked what they considered to be illegal immigration’s biggest consequence, the most common answer wasn’t violence, job losses, or cultural change; more than half said overuse of social services.

The polls elicited strong responses to questions on social issues.

For example, 76% said that they support doctors giving medical care to babies who survive abortion procedures, and 73% said political correctness is a problem.

The polling was done in three installments, Heritage Action said, with the first poll conducted by OnMessage Inc. from March 16 to March 19 among 1,500 likely voters in 15 key congressional districts.

The second poll was taken by Basswood Research from June 3 to June 6 among 1,200 voters across the country,  and the third was taken by OnMessage Inc. from June 22 to June 26 among 1,800 likely voters.