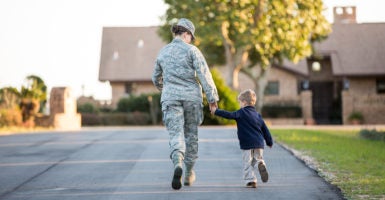 Active-duty service members and their spouses show strong support for “choice-driven education policies and programs” for their children, according to a survey on military families and K-12 education.

“It is a national security issue. … We need to not hurt our families by limiting their education,” said report co-author Lindsey Burke, director of the Center for Education Policy at The Heritage Foundation, during a presentation of the survey findings.

“We know that a strong national defense depends on a well-supported military,” Burke said.

Seven out of 10 current school parents favor programs such as education savings accounts, school vouchers, and charter schools, according to the report.

Additionally, military parents consistently ranked school safety as one of the highest priorities for military parents, with 40% rating a “safe learning environment” in their top three reasons for choosing a school.

“There [are] about 1.2 million children in military families across the country, so if we think about those children and military life … contrast that with the fact that half of all military families live in states with no school choice options whatsoever,” Burke said.

EdChoice, an educational freedom nonprofit that produces school choice research, conducted its “2019 Surveying the Military” report to expand upon its first military survey in 2017 and to explore what active-duty service members and their spouses think of military life and K-12 education.

“Military parents go above and beyond when it comes to supporting the education of their children,” the report notes. “Active-duty military parents are much more likely to say they have taken out a new loan or moved closer to school to support their child’s education, compared to current school parents in our ‘2018 Schooling in America’ survey.”

The report describes school choice as allowing public funds to be used by students in a way that is most compatible with their educational needs. School choice programs typically are funded through education savings accounts, school vouchers, tax credit scholarships, and individual tax credits or deductions. They can be used at public or online institutions, and for tutoring or other accommodations.

Since the 1940s, according to the report, the U.S. government has secured access to basic public school education for military families either directly on base or in a nearby public school district.

Now, the John S. McCain National Defense Authorization Act for Fiscal Year 2019, which President Donald Trump signed into law last August, includes an amendment addressing education savings plans that would allow families to accumulate up to $6,000 toward their child’s education annually. Any unused funds may be rolled over to the next year and eventually into a fund redeemable for higher education.

Sasse said in a press release:

If we’re going to face down global threats with the best and brightest, we need to make it easy for those moms and dads to take care of their families. Sadly, making the decision to defend our freedom sometimes means that service members’ kids miss out on the best education options available.

That’s unacceptable. Our bill helps fix this by letting military families customize their kids’ education, and by empowering them to find the opportunities that best fit their needs. Members of our armed services deserve the best we’ve got, and so do their kids.

Senate leadership referred the measure to the Finance Committee, where no action has been taken since.

The EdChoice report—also authored by the organization’s Paul DiPerna, vice president of research and innovation, and Andrew Catt, director of state research and special projects—surveyed 1,295 active-duty military service members and their spouses.

Kaylee Greenlee is a member of the Young Leaders Program at The Heritage Foundation.