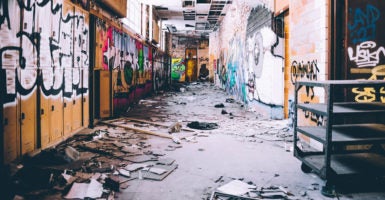 The Civil Rights Commission’s deference to the Obama administration’s heavy-handed letter favors bureaucrats over you and your child’s teachers. (Photo: Getty Images)

Teachers should be feeling whiplash.

In December, the U.S. Department of Education and the Justice Department rescinded federal directives that said Washington would investigate schools based on the number of times teachers and principals suspended or expelled minority students—even if the offending students had committed violence. A school could have lost federal funding as a result.

The rules came from a 2014 Obama administration letter sent to districts around the country instructing educators to limit such punishments, even if a student was a danger to his or her peers.

This 2014 letter mirrored the ideas from Broward County, Florida, where the school district limited suspensions and expulsions—and created a bureaucratic mess.

The accused February 2018 shooter at Marjory Stoneman Douglas High School slipped through the school district’s discipline program. In middle school, educators referred the accused shooter to Broward County’s program, a set of interventions designed to “reduce student arrests.” But the district admitted last May that administrators have no record of what, if anything, was completed.

Following the tragic deaths of 17 students, faculty, and staff and the wounding of 17 others at the Parkland, Florida, school, Broward school officials have faced scrutiny for their handling of the shooting. Then-Broward County Sheriff Scott Israel and several deputies were fired in connection with the disaster.

Over the years, as other district administrators followed federal guidance and limited student discipline, teachers reported feeling less safe in school and increased levels of harmful student behavior, as reported by the Manhattan Institute.

Studies from Florida and Philadelphia have found that leaving disruptive students in the classroom is related to negative academic outcomes for the peers of the offending students.

But in 2018, after the Broward County tragedy, Education Secretary Betsy DeVos led the Federal Commission on School Safety, which conducted hearings around the country seeking input from educators. The commission released a report containing best practices from local schools on safety, mental health, and student discipline.

The final report also called for the rescission of the 2014 “Dear Colleague” letter, and the departments of Education and Justice followed the recommendation.

The Federal Commission on School Safety explained its recommendation in the final report:

The [2014 Obama administration] Guidance sent the unfortunate message that the federal government, rather than teachers and local administrators, best handles school discipline.

As a result, fearful of potential investigations, some school districts may have driven their discipline policies and practices more by numbers than by teacher input.

In a report released Tuesday, however, the U.S. Commission on Civil Rights announced it had voted in favor of federal monitoring of school suspensions and expulsions, and criticized the use of exclusionary discipline.

The commission praised the 2014 guidance, saying the “Dear Colleague” letter “provided schools with important information about what the law is and how to address school discipline problems in a nondiscriminatory way.”

The Civil Rights Commission claims the guidance was just “detailed information about what the law is,” but the 2014 “Dear Colleague” letter sounded like Washington was looking for reasons to investigate.

The letter said schools should use “exclusionary discipline as a last resort” and contained an appendix with specific methods of data collection related to student discipline, restorative justice practices, and collaboration with law enforcement.

The commission’s recommendations would take a school’s focus off of school safety and student success in exchange for counting how many students of a particular race are disciplined, even if the students did something to warrant suspension.

The civil rights panel’s recommendations also suggest that federal agents should be more involved in local decision-making, taking authority away from parents, teachers, and school principals.

Parents and teachers know that all children are different and that situations involving punishment must be handled differently, specific to the circumstances.

In her dissent from the Civil Rights Commission’s recommendations, commission member Gail Heriot said that in schools with majority-minority student enrollment, “if teachers fail to keep order in those classrooms out of fear that they will be accused of racism, it is these minority students who will suffer the most.”

No children should be disciplined just because of the color of their skin. But the commission’s deference to the Obama administration’s heavy-handed letter favors bureaucrats over you and your child’s teachers.

DeVos and federal officials made the right decision last December in rescinding the Obama-era guidance. Parents and teachers, not federal bureaucrats, should make decisions about student safety.