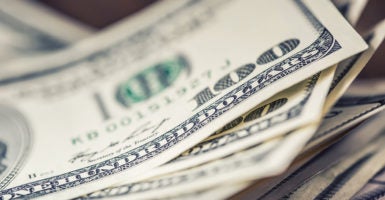 The massive spending deal, negotiated by Treasury Secretary Steve Mnuchin and House Speaker Nancy Pelosi and agreed to by the president, looks poised to kill off the Budget Control Act of 2011—the law that was meant to restrain federal spending.

With that law on the way out, the question arises: Where can fiscal conservatives turn to exert real and lasting fiscal discipline?

Thankfully, two members of Congress have introduced a bill to do just that.

The Maximizing America’s Prosperity Act—or MAP Act—is a bill proposed by Rep. Kevin Brady, R-Texas, and Sen. Mike Braun, R-Ind., that would limit federal spending to a fixed portion of the economy, adjusted for economic conditions.

The bill would enforce that spending limit by triggering automatic spending cuts when Congress fails to abide by the cap. The spending cap would then be slowly lowered year by year to achieve budget balance.

The end goal of this bill is to get federal spending back down to the level of federal revenue. This would bring the country leaps and bounds closer to the lean federal budget we need and toward finally stabilizing the debt.

The MAP Act builds off the best parts of the 2011 Budget Control Act and would correct some of its shortcomings, such as broadening the scope of spending that can be cut and doing away with the defense/nondefense bifurcation.

The Budget Control Act was limited by the fact that its spending caps only applied to about one-third of the federal budget—discretionary spending—while nondiscretionary (or mandatory) spending was allowed to continue growing unabated. In addition, it placed separate caps on defense and nondefense spending, creating incentives to lift the caps on both sides.

Spending on mandatory programs like health care and retirement are the real drivers of growth in our deficits and debt. By largely exempting these programs from spending limits and cuts, the Budget Control Act failed to address a structural defect that continues to plague our budget.

The MAP Act takes a better approach. It would fold all spending that isn’t interest on the debt under a single spending cap.

This would address both problems with the Budget Control Act. By making all programs subject to cuts, it would increase the likelihood of Congress agreeing on a savings package even though it may contain some things different lawmakers may not like.

In addition, the MAP Act would take important steps to account for the laws or provisions that require private actors, states, or local governments to spend their own money to carry out federal programs.

The MAP Act would subtract these unfunded mandates from the spending caps, preventing politicians from pushing spending binges off the federal balance sheet onto other entities, like states.

The MAP Act is not perfect. Like the Budget Control Act, it would exempt certain programs from its automatic spending cuts or sequestration—mostly mandatory spending programs like Social Security and other designated benefit and welfare programs.

Additionally, the MAP Act would limit required spending cuts to a maximum of 5% of the overall budgets of affected programs, even though some programs may need more severe cuts.

Nonetheless, the MAP Act would be a strong and needed step forward. Congress needs fiscal rules to restrain and reduce its spending and the federal debt. Without effective fiscal restraints as part of the budget process, lawmakers are prone to support bloated programs and unsustainable spending increases like the one we’re witnessing now.

Effective rules restrain the tendency of democracies to spend more than they can afford, and in the long term help preserve limited government.

Such rules, however, only work if we agree to follow them.

While the MAP Act represents an important step toward recovering America’s fiscal health, it will only be effective if Congress commits to the actual goal of the bill: to restrain spending based on the principles of limited government as guided by the Constitution.

The MAP Act’s budget rules could help rein in high deficits and wasteful spending, but such rules only work if lawmakers agree to abide by them—and they only abide by them if the public makes it an issue.

America’s chronic federal deficits are not the result of a rogue conspiracy against the public. Rather, they are the direct result of the failure of the body politic to demand sustainable spending levels.

At the end of the day, our federal spending habits embody the corruption of our republic’s fiscal and moral order. We must be better.