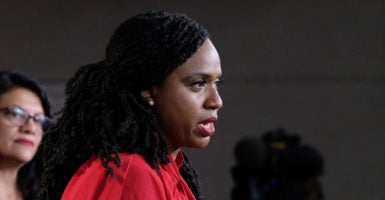 Much of American history has been about Americans of every color and creed rising up beyond the constraints of race, ethnicity, and background to become part of the great American story—an individual not beholden to his past.

But don’t tell this to Rep. Ayanna Pressley.

At the liberal Netroots conference on Saturday, the Massachusetts Democrat told the audience:

To Pressley, it seems, one’s political “voice” must conform to the collective “voice” of the group that one belongs to based on racial, ethnic, and sex traits—traits that are either impossible or very difficult to change.

She desires to exclude black people from her movement who would rather avoid the muck of contemporary racial politics, or who even speak out against it. Black people must be “advocates” for their own race, whether they feel the strong push toward social justice or not. Otherwise, they don’t deserve a seat at the table.

This is authenticity politics of the worst kind—the same kind of bullying politics that rips into Hispanics who don’t speak Spanish or Asian Americans who do some things considered “white,” or gay men for voting for Donald Trump.

This runs directly against the American ideal of crafting one’s own personal destiny, of refusing to be limited by the presuppositions and stereotypes of one’s own tribe.

In many ways, minority dissenters are doubly attacked by the modern-day left, which despises any deviation from the dualistic privilege-and-oppression narrative.

I once witnessed an African American friend in college excoriated by his black peers for daring to speak out against the obvious racial division in the fraternities—which were very neatly divided into “white” and “black” social clubs with little interaction.

I remember one self-righteous student claim that my friend’s position delegitimatized him as an “advocate” for the black group. No one went easy on him because he was black. In fact, they attacked him harder.

There is actually a pejorative term used to describe black people who stray from racial orthodoxy (as determined by the leftist intelligentsia): “Uncle Tom.”

The derogatory term gained popularity in white minstrel shows in the 19th century to refer to black people who are unhelpful and even seditious against their race.

The African American community later adopted the epithet, and now, many—like Adena Spingarn of The Root—consider it “the ultimate black-on-black insult.”

The way Pressley frames it, black people in her party who don’t advocate the things she wants—radical leftist policies underscored by vitriol—are equivalent to “Uncle Toms” who don’t deserve a seat at the table.

Those dissenting minorities shamed for their heterodoxy can at least take solace in this consolation: Uncle Tom was originally the black hero of Harriet Beecher Stowe’s “Uncle Tom’s Cabin,” a historic best-seller that aided the abolitionist cause.

What is the true “black voice,” anyway?

The “black voice” is, in many ways, the American voice. Black Americans have had a profound influence on the history and greatness of this country.

Far from being consigned to slavery and the permanent underclass of America, black Americans have advanced to the highest positions in American society, from science to religion and even the heights of political office.

But Pressley prefers to see all of the riches of black U.S. history through the lens of her provincial, narrow-minded worldview, where blacks aren’t people, but rather eternally oppressed victims.

Millions of this nation’s proud African Americans might have something to say about that.