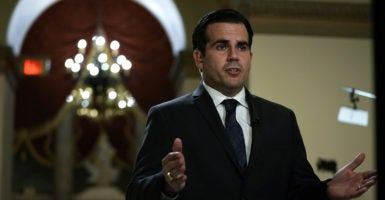 Puerto Rico Gov. Ricardo Rosselló says he will leave office on Aug. 2 after group chats were leaked containing homophobic and sexist remarks made by the governor. Pictured: Rosselló is interviewed by a TV channel after a House vote at the Capitol Dec. 21, 2017, in Washington, D.C. (Photo: Alex Wong/Getty Images)

Wednesday marked the fifth day of thousands marching in protest of Rosselló after leaked group chats revealed reportedly sexist and homophobic remarks from the governor amid corruption accusations.

“I think for too many decades we’ve been subjected to a government of corruption, of abuse, a government that doesn’t look after the people and only looks after its own interests,” said Héctor Díaz, a 21-year-old student from the southern municipality of Ponce, The Wall Street Journal reported.

“This is the generation that’s going to stand up against corruption, against what for decades has destroyed our country.”

Rosselló will officially step down Aug. 2.

Kaylee Greenlee is a member of the Young Leaders Program at The Heritage Foundation.