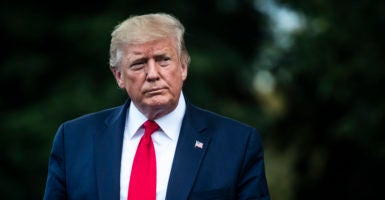 As the oldest and largest civil rights nonprofit in the U.S., the NAACP joins the 87 House members who support an impeachment of President Donald Trump. Pictured: Trump walks from the Oval Office to board Marine One on July 17. (Photo: Jabin Botsford/The Washington Post/Getty Images)

The NAACP is calling for President Donald Trump’s impeachment following a speech made by a stalwart of the effort at the group’s annual convention Tuesday.

Derrick Johnson, NAACP CEO and president, announced via Twitter that the organization’s national delegation voted unanimously in favor of a resolution to “initiate the Articles of Impeachment for Donald J. Trump.” The resolution was voted on during the convention.

“The pattern of Trump’s misconduct is unmistakable and has proven time and time again, that he is unfit to serve as the president of this country,” said Johnson.

The group cites numerous reasons for impeaching the president, including “his attempts to curtail the scope of Robert Mueller’s Investigation” and “his numerous attempts to avert the Supreme Court’s decision to not add in the citizenship question to the 2020 Census.”

The NAACP also branded the Trump administration as “one of the most racist and xenophobic” since the era of “Jim Crow” for its “caging immigrant children without food or water” and for his controversial tweet “calling out minority congresswomen and telling them to go back to their countries.”

As the oldest and largest civil rights nonprofit in the U.S., the NAACP will join the 87 House members who support an impeachment of the president, including Rep. Rashida Tlaib, D-Mich., who said at the convention that she is “not going nowhere, not until I impeach this president.”

House Speaker Nancy Pelosi, D-Calif., who was also one of the speakers at the convention, did not reference Trump during her speech. She has resisted recurring calls for pursuing impeachment.

Going against the grain of the speaker, Green has a record of pushing impeachment measures in the House of Representatives. His latest attempt was defeated last week in the House with a vote of 332-95. Of the 85 Democrats who have voiced their support for starting the impeachment process, 14 joined Republicans in killing Green’s resolution.

Green introduced privileged impeachment resolutions in December 2017 and January 2018, which were ultimately unsuccessful.