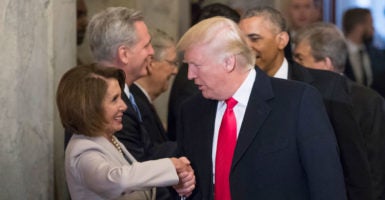 Trillion-dollar deficits are back, and they’re here to stay.

That’s the message being sent by President Donald Trump and congressional leaders through their recently agreed to budget mega-deal, announced on Monday.

The Bipartisan Budget Act of 2019 is the fourth two-year agreement to raise the discretionary spending caps set in 2011 as part of the Budget Control Act. The deal marks the final nail in the coffin for the 2011 law and portends an alarming future for Americans that care about the nation’s fiscal future and economic prosperity.

We could all soon pay a heavy price for this irresponsibility.

While the three previous deals—and particularly the Bipartisan Budget Act of 2018—were bad, the 2019 deal is even worse. It contains almost no victories for conservatives.

In total, the plan would raise the Budget Control Act spending caps by $322 billion over the next two years. Of that total, $172 billion would go toward national defense while the remaining $150 billion would be spent on domestic programs.

That’s only part of the story, though. Higher spending levels over the next two years will almost certainly lead to higher spending in subsequent years. It also doesn’t take into account the higher debt and, in turn, higher interest payments on that debt that will result.

The Committee for a Responsible Federal Budget estimates that the real cost of raising the discretionary spending caps could be $1.7 trillion over 10 years.

The Pentagon will receive a measure of certainty from the additional defense and the deal’s timing, still, the 2020 funding level falls short of what the president requested and the Senate authorized. The 2021 budget level would be a mere 0.3% increase, which represents a loss of real purchasing power after accounting for inflation.

This is insufficient, and it will require the Department of Defense to take increased risks in the execution of the National Defense Strategy.

In addition, the deal’s increases to domestic spending are wholly inappropriate. Many of these domestic programs fall outside the proper role of the federal government and should be cut or eliminated entirely, rather than receiving additional funding.

Instead of increasing domestic spending, lawmakers should find ways to appropriately fund defense spending within the existing cap levels. The Heritage Foundation’s “Blueprint for Balance” offers a way to spend $742 billion on defense in fiscal year 2020, while staying $40 billion below the total Budget Control Act cap.

On top of the new spending, the budget deal would suspend the debt limit for two years. This is a mistake on a number of levels.

First, the debt limit is too important an issue to be dealt with in the context of a massive spending deal. Reaching the debt limit should serve as a wake-up call for lawmakers to confront their irresponsible spending habits. Burdening younger and future generations with yet more debt should be a subject of serious debate, not a casual add-on to a budget-busting deal.

The deal also errs in suspending the debt limit as opposed to raising it by a specific amount. Doing so gives the federal government carte blanche to rack up as much new debt as it wants over the next two years, without any limit.

The only responsible approach to raising the debt limit would be to first enact spending cuts and budget reforms that would move the U.S. budget onto a sustainable path. Everything else is just taking out a new credit card.

The spending and debt limit deal contains just $77.5 3 billion in offsets, less than a quarter of the new spending, and those offsets are dubious at best. Part of the savings would come from a two-year extension of customs user fees, a gimmick that has been used in each of the last three budget deals.

The fee was established to offset the cost of customs inspections, but more recently it’s become a favorite means for Congress to raise unrelated spending. If these fees aren’t needed for their intended purpose, then they should be discontinued and the savings passed on to travelers.

The deal’s remaining offsets would come through an extension of the Budget Control Act’s mandatory sequestration preventions.

Extending the mandatory sequester is good policy, but it is woefully inadequate to keep up with the discretionary spending increases contained in this bill.  Equally troubling is that fact that these savings wouldn’t begin to materialize until nine years from now, leaving ample time for Congress to reverse the cuts.

If lawmakers want to raise the spending caps, they should fully pay for it with immediate reforms to mandatory spending programs.

Leading up to the deal, there was hope for a more responsible path forward. Congressional Quarterly reported that the president offered Democrats a menu of $574 billion worth of offsets to consider. The administration also reportedly proposed extending the Budget Control Act caps for two more years, through 2023, saving an additional $516 billion.

Unfortunately, these proposals were eventually dropped.

Trump was elected in part on his promises to balance the budget—and his first budget proposal as president did just that. His two subsequent proposals would have significantly cut spending and reduced the size of the federal government.

But putting out good proposals is not enough. The administration also needs to put its weight behind those proposals to get traction.

Agreeing to this budget deal would flatly contradict the policies this administration has put forward. The president has lamented how much the debt grew under President Barack Obama, but if this latest budget deal becomes law, his record will be no better.

It’s not breaking news that America’s budget situation is unsustainable. The Congressional Budget Office has been warning of a budget breakdown for years. Unfortunately, most lawmakers don’t seem to get it—or just don’t care.

This is incredibly shortsighted. The decisions Congress makes today will fundamentally impact the lives of future Americans.

Citizens look to Congress for leadership. If lawmakers want to lead us to a more prosperous and secure future, they will rethink this budget deal and forge a more responsible path forward.