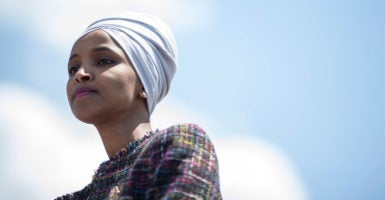 While the State Department was trying to stop religious hostility, one congresswoman was down the street trying to fuel it. In an eerie backdrop to the Trump administration’s ministerial, Rep. Ilhan Omar, D-Minn., seemed determined to highlight the threat that exists right here at home—radical Democrats.

Omar, who hasn’t exactly been a friend to Israel, took her contempt to a new level this week when she introduced a new level of anti-Semitism into her congressional agenda.

If she learned anything from her February scandal, when she demeaned the Jewish people and drew the ire of her own party, Omar hasn’t shown it. Instead, she’s doubled down on her obvious disdain for Israel with a resolution that would support the anti-Semitic Boycott, Divestment and Sanctions (BDS) movement.

If you’re unfamiliar, the BDS movement that Omar is promoting is an effort reminiscent of what took place in Nazi Germany leading up to World War II.

In 1933, the German government launched Judenboykott, a boycott of Jewish stores and shops designed to not only to hurt the Jewish community economically but to stigmatize and delegitimize the Jewish people. The BDS movement—whether stated or not—has the same effect, only it is an international effort targeting the state of Israel.

The BDS movement is being done in the name of the Palestinians, attempting to force Israel to give up its land in the eastern portion of the country, Judea, and Samaria.

The sad irony is that while targeting Israel, the movement is hurting many Arabs and Palestinians who are working side by side with Jewish residents in these communities.

I’ve been to places like Ariel, which have thriving industrial parks that employ hundreds of Palestinians. The reality is, in those communities, Israel’s thriving economy is fostering a managed and sustainable peace that so many on the outside have promised through third-party intervention.

The criticism has been so overwhelming that CBS News invited the Minnesota congresswoman on its morning show to explain.

“Would you like to make it clear that you’re not anti-Semitic?” Gayle King asked.

“Would you like to make that clear?” King asked again.

“Yes,” Omar repeated, a little more frustrated this time. “Oftentimes there are things that you might say, might not hold weight for you, but to someone else, right, the way that we hear and consume information is very different than how the next person might,” she explained.

Of course, to the Jewish people here and abroad, it’s more than what Omar has said (and that’s more than enough). It’s what she’s doing that speaks the loudest.

Vice President Mike Pence, like most conservatives and reasonable Democrats, isn’t fooled. He knows this is part of a much deeper hatred, which, if it isn’t stopped now, has the potential to unleash a frightening new chapter in America.

“Anti-Semitism is on the rise,” he warned at the ministerial. “In France and Germany, things have gotten so bad that Jewish religious leaders have warned their followers not to wear kippahs in public for fear that they could be violently attacked. And attacks on Jews, even on aged Holocaust survivors, are growing at an alarming rate.”

Then, in a direct nod at Omar, said, “Regrettably, the world’s oldest hatred has even found a voice in the halls of our United States Congress. So let me say it clearly: Anti-Semitism is not just wrong; it’s evil. And anti-Semitism must be confronted and denounced wherever and whenever it arises, and it must be universally condemned.”

That’s a scary thought to most Americans, who assumed the U.S.’ new envoy to combat anti-Semitism wouldn’t be needed here at home.

But, as Noam Marans explained at a panel I joined at the ministerial, “Hate is an equal opportunity offender. It sometimes begins with Jews, but it never ends with Jews.”

That’s why the U.S. Congress—and Democratic Party in particular—needs to stand up and make it clear: This kind of dangerous prejudice won’t be tolerated.

Irene Weiss, a Holocaust survivor, who spent eight months in Auschwitz sleeping next to the crematorium, understands all too well where this leads. “Day and night columns of young mothers with children, and elderly men and women, took their last steps as they passed by our barrack. We watched them enter the gate that led to the gas chamber.”

She thought no one could have possibly known such evil existed. “If they knew, surely they would stop it.” It turns out, world leaders knew about Auschwitz and the other extermination camps. “But the killing continued.”

Seventy-years later, she said soberly, “Humanity’s vulnerability to the same forces of hate exists today.” And we cannot say we did not know.