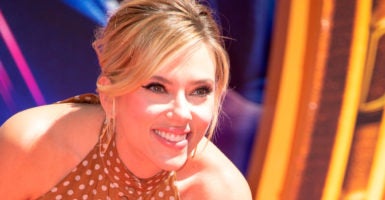 Actress Scarlett Johansson took heavy flak for accepting the role of a transgender character before pulling out of the film. (Photo: Valerie Macon/AFP/Getty Images)

Actors make a living portraying other people’s identities. It’s what they do, and they’ve done it for millennia.

Yet today, loud voices for political correctness are seeking to redraw the lines of acceptable identity portrayal.

The question is: Who has the right to play who on the big screen? Political correctness says: Only actors with the right identity and lived experience.

Scarlett Johansson has become Exhibit A in this debate.

First, she took flak in 2017 for playing a Japanese character in the live-action remake of the 1995 anime film “Ghost in the Shell.” The following year, controversy erupted when she accepted the role of a transgender character in “Rub and Tug.” Many thought that role should have gone to a real trans person.

Succumbing to public pressure, she withdrew from the role, and in doing so she hit the predictable PC notes:

Our cultural understanding of transgender people continues to advance, and I’ve learned a lot from the community since making my first statement about my casting and realize it was insensitive.

I have great admiration and love for the trans community and am grateful that the conversation regarding inclusivity in Hollywood continues.

But it hardly ended there.

In a more recent interview with As If magazine, Johansson may have let her true feelings slip. She expressed regret at losing the role, saying she “should be allowed to play any person, or any tree, or any animal because that is my job and the requirements of my job.”

Of political correctness, she said:

I feel like it’s a trend in my business, and it needs to happen for various social reasons, yet there are times it does get uncomfortable when it affects the art because I feel art should be free of restrictions.

But soon after those comments went public, she clarified yet again, saying they were taken out of context:

I personally feel that, in an ideal world, any actor should be able to play anybody, and art, in all forms, should be immune to political correctness. I recognize that in reality, there is a widespread discrepancy amongst my industry that favors Caucasian, cisgender actors, and that not every actor has been given the same opportunities that I have been privileged to.

Johansson is clearly caught between two poles: the acting profession as it’s always been, and the ascendant moral code of identity politics—and the two cannot both win out.

No doubt, you might be thinking, “So what if she’s not actually transgender? If she plays the role well, if it’s compelling, who cares what she is in real life? That’s the nature of acting, right?”

And you would be right. “Wokesters” on the left might even agree: Perhaps she is capable of a compelling performance.

But of course, that misses the point for them. Their concern is not artistic, but instead, deeply moralistic.

Even if she does a great job acting, it’s a grave sin for a straight, cisgender, white woman to presume—what privilege!—to portray the experience and narrative of a trans person. She doesn’t know their experience, after all, and the greatest sin in the Church of Political Correctness is presuming to speak somebody else’s narrative.

The problem is, you could apply that logic to any actor-character relationship. Why draw the line at your “identity” group? No actor truly shares the experience of their character, except in a rare few cases.

But the left won’t apply its logic that far. That’s good, insofar as it preserves at least some space for acting. But their reason for drawing the line at identity is still flawed: They think identity is the defining aspect of one’s existence. You are not defined mainly by your humanity, but rather by your skin color, gender, and sexuality.

That’s an ideological cancer, and it poses a real threat to the acting profession long term.

If Hollywood applies this standard consistently, it will exclude wonderful, qualified actors from playing all sorts of roles that they would hit out of the park, and which could actually validate the experiences of many people.

All that would be denied to placate a faux morality that serves no one.

It’s worth noting that fake PC morality is extremely new, even for Hollywood. About 25 years ago, Tom Hanks (a straight man) achieved critical success playing the role of a gay man with AIDS in the 1993 film “Philadelphia.” His partner in the film was played by Antonio Banderas—also a straight man.

At the time, the gay community lauded the film as a critical milestone. But today? Political correctness would demand Hanks and Banderas step aside. How dare they speak for gays?

The left seizes upon “identity” for an understandable reason: Such groups really do share common experiences. Being black, white, man, and woman really does make a difference in our lives.

But the left ought to peel back more layers and see that within those “identity” groups, there is still a great diversity of experience, not to mention diversity of opinion.

Ultimately, there are as many narratives as there are individuals. As psychologist Jordan Peterson has pointed out, identity politics really should just break down into individualism.

The fundamental truth we need to embrace is that we are, at the same time, individuals and human beings. Our individuality makes our stories unique. Yet our humanity—our being made in the image of God—gives us a common reference point. It allows us to sympathize with, empathize with, and in a limited but real way, enter into each other’s experiences.

Our humanity is the bridge that links our diverse lives.

The left used to champion such a universal vision. “We’re all God’s children,” they would say. Now, not so much. We are instead hopelessly siphoned off from each other’s experiences.

Unless Hollywood begins to see political correctness for what it is—a fake morality that helps nobody—we can expect to see more blow-ups over “cis” and “straight” actors taking roles they apparently shouldn’t have, and more alienation between disparate “identity” groups.

That’s hardly a liberal utopia. Let’s hope Hollywood and the rest of our culture wakes up to the destruction that awaits if we embrace identity politics.