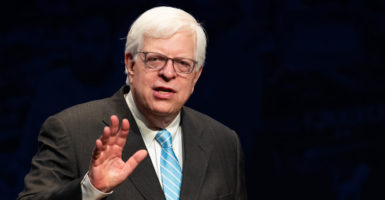 “Google, which owns YouTube, has restricted access to 56 of our 320 five-minute videos and other videos we produce,” Prager, co-founder of Prager University, told the Judiciary subcommittee on the Constitution.

In prepared testimony, Prager said his video-producing organization, known as PragerU, never got an explanation for why YouTube restricted the videos.

“‘Restricted’ means that families that have a filter to avoid pornography and violence cannot see that video,” Prager told senators. “It also means that no school or library can show that video.”

Sen. Ted Cruz, R-Texas, subcommittee chairman, held the hearing to look into the issue of the global internet giant and censorship, especially of conservative organizations, individuals, and ideas.

Karan Bhatia, Google’s vice president of government affairs and public policy, pushed against the notion that the tech company is partisan.

“Google is not politically biased,” Bhatia said in his prepared remarks, adding:

Indeed, we go to extraordinary lengths to build our products and enforce our policies in an analytically objective, apolitical way. We do so because we want to create tools that are useful to all Americans. Our search engine and our platforms reflect the online world that is out there.

The Daily Signal sought comment Wednesday from Google on Prager’s account; the company acknowledged the request, but had yet to respond at publication time.

Cruz previously held a hearing in April with officials from Facebook and Twitter, where he raised concerns over social media bias and censorship.

YouTube says it restricts videos that contain content such as dangerous or threatening pranks, violent events, creation or use of hard drugs, and instructions to kill or harm.

What it calls “age-restricted content” is not available to logged-out users, those under 18, or those who have activated “restricted” mode, YouTube says.

“A video that is not available in Restricted Mode is not necessarily age-restricted,” YouTube says on its site.

Cruz appeared on Fox News Channel’s “Fox & Friends” early on the day of the hearing to discuss Google and censorship.

On the Fox show, the Texas Republican also mentioned YouTube’s censorship of PragerU.

Also speaking at the hearing were other representatives from the technology and academic fields, including Jason Kint, chief executive officer of Digital Content Next; Francesca Tripodi, assistant professor of sociology at James Madison University in Harrisonburg, Virginia; Robert Epstein, senior research psychologist for the American Institute for Behavioral Research and Technology; and Andy Parker, a gun control advocate and father of Alison Parker, a local TV reporter who was shot and killed during a live TV interview in 2015.