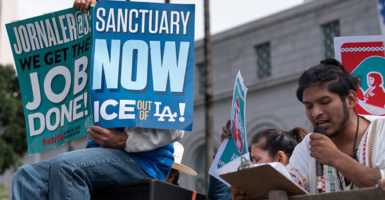 Protesters rally on Feb. 18, 2017, to call for a stop to raids by Immigration and Customs Enforcement and deportations of illegal immigrants, and establishing Los Angeles as a sanctuary city. (Photo: Ronen Tivony/NurPhoto/Getty Images)

Illegal immigrants released by local police in California after their arrests for minor offenses go on to be charged with more serious crimes such as murder, rape, and assault, according to a new government report.

Those crimes could have been prevented if these sanctuary jurisdictions had turned over those accused to federal immigration officials for deportation, the report suggests.

In one case, police in San Francisco arrested an illegal immigrant from Honduras again and again over nine months as he repeatedly was released and then booked again for more offenses rather than turned over to federal officials.

The cases are documented in the newly published quarterly Declined Detainer Report from U.S. Immigration and Customs Enforcement covering January, February, and March 2018.

The report focuses solely on California jurisdictions, although most large municipalities across the country adopted “sanctuary” policies that prohibit local law enforcement from assisting federal immigration authorities. California is a sanctuary state.

When ICE determines an illegal immigrant accused of a criminal offense is in police custody, the agency issues a detainer. The paperwork is supposed to ensure the alleged offender will be transferred to federal authorities at the conclusion of his or her time in the local jail, instead of being released.

But sanctuary jurisdictions—as a matter of policy—ignore the detainers, which in some cases means the criminal illegal immigrants are released and able to commit new crimes rather than be deported.

Additionally, some jurisdictions willfully decline to honor ICE detainers and refuse to timely notify ICE of an alien’s release, and may do so even when an alien has a criminal record. Unfortunately, a number of aliens who have been released under these circumstances have gone on to commit additional crimes, including violent felonies. ICE maintains that most of these crimes could have been prevented if ICE had been able to assume custody of these aliens and remove them from the country in accordance with federal immigration laws.

ICE released the report as the agency seeks to deport illegal immigrants whose cases were adjudicated and whoreceived final deportation orders.

Numerous mayors have vowed not to cooperate with ICE enforcement actions. Los Angeles Mayor Eric Garcetti, with Police Chief Michel Moore at his side, told illegal immigrants over the weekend:  “Your city is on your side.”

Critics of ICE’s current enforcement actions say, among other things, that the Trump administration should focus on criminal illegal immigrants.

The new report notes an irony to the outcome of sanctuary policies.

“Ultimately, a jurisdiction’s decision to ignore ICE detainers increases the need for ICE’s presence in communities and requires additional resources to locate and arrest removable aliens,” the report says.

Among local law enforcement agencies cited in the ICE report is the San Francisco Police Department, which repeatedly arrested the Honduran man on various criminal charges.

“The San Francisco Police Department does not enforce immigration laws and department policy prohibits SFPD members from placing administrative immigration holds or detainers on arrestees,” Sgt. Michael Andraychak told The Daily Signal in an email, citing this policy. “SFPD does not receive and is not involved in receiving or placing civil/immigration detainers lodged by ICE.

The Daily Signal sought comment from each local law enforcement agency mentioned in this story. Only the San Francisco Police Department responded as of publication time.

Here are six examples of multiple crimes committed by individual offenders cited in the ICE report.

On Jan. 7, 2018, the Los Angeles Police Department arrested and charged a 30-year-old Mexican man with possession of a controlled substance.

Because he was in the country illegally, ICE issued a detainer order on the day of the arrest. The LAPD didn’t honor the detainer and released the man.

On Feb. 26, 2018, the LAPD arrested and charged him again, but this time for murder. ICE issued another detainer, but the man remained in local custody as of the writing of the agency’s report.

The San Luis Obispo County Sheriff’s Office arrested a  28-year-old Mexican man on Dec. 8, 2017, charging him with a probation violation.

The next day, ICE issued a detainer that the sheriff’s office did not honor, according to ICE, and he was released.

Little more than a month later, on Jan. 16, 2018, the man was arrested and charged with rape and threatening a crime with intent to terrorize. The next day, ICE issued another detainer, which the sheriff’s office again ignored.

The sheriff’s office released the man, but this time he didn’t go free. ICE arrested him in Los Angeles on Jan. 23, 2018. On Oct. 4, 2018, the government removed him from the United States and sent him back to Mexico.

Perhaps the most arrests for a single individual in the fiscal year came for a 23-year-old Honduran man, who was repeatedly arrested, jailed, and released in San Francisco as law enforcement ignored ICE detainers.

Police then arrested him on April 18, 2018, on an outstanding warrant for second-degree burglary, possessing burglary tools, possessing a controlled substance, and stealing a vehicle.

Not even a month later, on April 30, police picked up the man again on charges of burglary, possessing unlawful paraphernalia, and possessing burglary tools.

His next arrest came Aug. 10, on charges of operating a bicycle on a roadway, breaking a headlight law, and taking a vehicle without the owner’s consent.

On Sept. 14, the Honduran man was arrested again on charges including trespassing, possessing unlawful paraphernalia, and taking a vehicle without the owner’s consent.

Two weeks later, on Sept. 28, police arrested him on charges of possessing a stolen vehicle, evading a peace officer, stealing a vehicle, driving without a license, and three counts of taking a vehicle without consent.

Police next arrested the illegal immigrant Nov. 16 on charges of second-degree burglary and two counts of taking a vehicle without consent.

Police then arrested him Dec. 10 for two counts of taking a vehicle without consent and second-degree burglary, and Jan. 3, 2019, for possessing burglary tools and tampering with a vehicle.

A few weeks later, on Jan. 21, police arrested the Honduran man on charges of first-degree and second-degree burglary, two counts of possessing burglary tools, and two counts of taking a vehicle without consent.

Had San Francisco turned over the illegal immigrant to ICE after his first arrest in February 2018, the report suggests, it’s likely the government would have deported him and the San Francisco Police Department would not have had to charge him in the course of nine arrests between April 2018 and January 2019.

4. Suspect in Assault at Large

The Beverly Hills Police Department charged a 26-year-old Mexican man with burglary, possession of burglary tools, and criminal conspiracy on Feb. 13, 2018. Police transferred him to the Los Angeles County Jail.

ICE issued a detainer that same day, but police released the illegal immigrant.

Two months later to the day, on April 13, 2018, police arrested the same man on a charge of attempted murder. ICE issued another detainer the next day.

Police again declined to turn over the man and released him. He remained at large as of the writing of the ICE report.

The Los Angeles Police Department arrested a 24-year-old man from El Salvador on Dec. 13, 2017, on a charge of taking a vehicle without the owner’s consent.

ICE issued a detainer on Feb. 5, 2018, but Los Angeles law enforcement ignored it, according to the ICE report.

The LAPD released the man, but arrested and charged him again on Feb. 8, 2018, for possessing a controlled substance and taking a vehicle without consent.

ICE issued another detainer on April 24, 2018, but Los Angeles authorities ignored it and released the man.

The Santa Cruz County Sheriff’s Office arrested a 23-year-old Mexican man on March 29, 2018, on a charge of inflicting corporal injury on his spouse.

He was arrested again on the same charge on April 11, 2018, but again local authorities didn’t honor an ICE detainer.

Authorities arrested the man on Jan. 16, 2019, charging him with driving under the influence of alcohol and assault with a deadly weapon.

ICE issued a detainer that same day, the report says, “but as of the writing of this report, [ICE] believes the alien has been released and remains at large.”