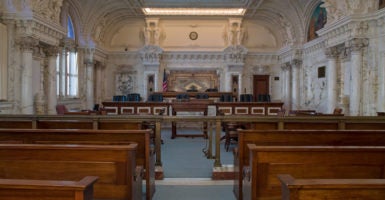 There’s a reason Planned Parenthood likes to challenge pro-life laws on the West Coast. It knows the cases will eventually bubble up to the most liberal bench in the country—the 9th U.S. Circuit Court of Appeals.

Elections have consequences, and they’ve been big ones for the makeup of America’s courts. Just last week, Trump added another originalist to the 9th Circuit bench, Daniel Bress—bringing the administration’s total for the much-maligned court to seven.

For the first time in decades, the 9th Circuit, which Trump has accused of being “out of control” with “a horrible reputation,” is on the verge of ideological balance. And for liberals, who rely on the courts to do what legislatures will not, the prospect of losing their grip is daunting.

On Thursday, abortion extremists started to feel the effects of the president’s court-leveling when the 9th Circuit refused to stop the administration’s family planning rules from taking effect.

In a shocking blow to Planned Parenthood’s ego, the judges ruled 7-4 that the Department of Health and Human Services’ rule stopping Title X grantees from promoting abortion could go into effect. Making the decision even more upsetting for liberals, two of the judges in the majority were Trump appointees.

If the rule goes into effect, groups like Leana Wen’s Planned Parenthood could stand to lose millions of dollars.

Wen, who’s obviously unaccustomed to bad news from the 9th, called the decision “devastating.” And not just for her bottom line, which could suffer a $60 million loss—but for the left’s whole court-shopping strategy.