Barr Is Right: The Trump-Russia Conspiracy Is ‘Bogus’ 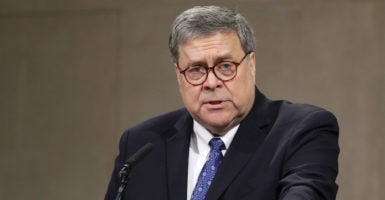 “What we’re looking at is: What was the predicate for conducting a counterintelligence investigation on the Trump campaign?” Attorney General William Barr asks. (Photo: Chip Somodevilla/Getty Images)

In a recent interview with The New York Times, Attorney General William Barr reiterated his intention to find out why the Obama administration launched an investigation into the Republican Party presidential candidate’s campaign during the 2016 campaign.

If the political parties in the sentence above were reversed, we would be in the midst of the biggest scandal in our lifetimes.

As things stand, however, we are once again reduced to arguing over semantics. And one Barr quote, in particular, has gotten Democrats and their media allies agitated.

“What we’re looking at is: What was the predicate for conducting a counterintelligence investigation on the Trump campaign?” Barr asked. “How did the bogus narrative begin that Trump was essentially in cahoots with Russia to interfere with the U.S. election?”

The usual suspects found it “dishonest” that the attorney general would refer to a narrative that has been debunked by an aggressive two-year independent counsel as “bogus.”

“Barr offers yet another slanted quote about the Russia investigation,” a Washington Post headline reads.

It bears repeating that the Mueller investigation couldn’t uncover a scintilla of evidence showing that the Trump 2016 campaign “colluded” with Russia to win the election.

There is not a single Mueller indictment linked to Trump’s 2016 campaign. Not for a lack of trying. The prevailing Russia narrative was, much like Birtherism, “bogus.”

“But he’s not talking about the broader political debate over it,” The Post’s Aaron Blake points out, “he’s talking about it in the context of law enforcement. He’s tacitly ascribing the ‘bogus narrative’ to the investigators.”

Barr is giving investigators the benefit of the doubt by claiming, and not very tacitly—since he explicitly states it in The New York Times piece—that he interested the “systematic,” not individual, failures that allowed the FBI to spy on an opposing political campaign.

In any event, Barr’s antagonists argue that we already know that the counterintelligence investigation was completely legit.

A low-level functionary said something about Hillary Clinton and Russia. Donald Trump made a dumb joke about Clinton’s emails and hired campaign advisers like Michael Flynn, “who attended a dinner with Vladimir Putin,” and Carter Page, who had “with Russia ties,” and Paul Manafort, “who worked for a Russia-allied president of Ukraine.”

The question is what kind of precedent does this standard set?

It might come as a surprise to some, but being friendly with Russians—even autocratic ones—isn’t a criminal act. Trump openly advocated better relations with Putin. A presidential campaign has the right to hire people who will pursue its foreign policy goals. Whether it’s good policy is up to voters, not intelligence agencies.

Using the Democrats’ precedent, in fact, the Trump administration would be free to launch investigations into any campaign that hired, say, Iran sycophants like John Kerry, Ben Rhodes, or Samantha Power.

Democrats have both openly dined and secretly met with Iranian officials. The Iranians, who use a designated terrorist group to fulfill political objectives, are also trying to undermine our democracy, hacking highly classified intelligence.

All Trump needs is to fund a firm to write up some fabulist dossier.

And those who claim that it’s “uncharitable,” as Blake does, or irresponsible or unpatriotic to suggest that anyone within the intelligence community might have engaged in corrupt or politically motivated behavior, probably haven’t been paying attention.

Former CIA Director John Brennan spied on the legislative branch and lied about it to the American people. Former Director of National Intelligence James Clapper spied on the American people through a domestic surveillance program and then lied about it to Congress. The Obama administration spied on journalists and then prosecuted them. It’s completely plausible that shortcuts were taken for political reasons.

It is telling that those dismayed by Barr’s allegedly tacit accusation against Obama’s Justice Department have no problem accusing Barr of running an improper investigation. Or that most of the same people who entertained every absurd theory about Russia interference are now offended that Barr uses the word “spying” to describe the action of spying and “bogus” to describe a spurious conspiracy.

Whatever the case, explicit or tacit, none of this means investigators are guilty of wrongdoing.

Aren’t all the same arguments we’ve been hearing about law and order still in play? For more than two years, didactic Democrats lectured about how transparency was a reflection of a healthy democracy.

The bogus Russia narrative, after all, caused tremendous damage. It consumed political media coverage for two years, leading to wild speculation and a string of outright false stories designed to undermined trust in the legitimacy of the electoral system for partisan reasons.

Because ultimately, the bogus narrative was far more effective in interfering in American politics than anything a Russian Twitter army or hackers could ever accomplish.