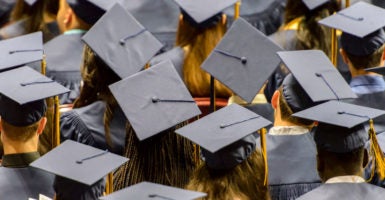 Every year, colleges raise tuition prices yet again. That’s helped create the student debt crisis, and it’s causing more young people to skip college altogether. But what’s the government’s role here? Is it making things worse? And if so, what’s the solution? Richard Vedder, author of
“Restoring the Promise: Higher Education in America” shares his thoughts. Read the interview, posted below, or listen on the podcast:

Daniel Davis: I’m joined now by Richard Vedder. He is senior fellow at the Independent Institute and author of the book “Restoring the Promise: Higher Education in America.”

Mr. Vedder, thank you for joining us.

Richard Vedder: Delighted to be with you, Daniel.

Davis: So, lots of younger folks, in my generation and younger, are saddled with student debt and I want to ask you about that.

We often think of student federal aid as a good thing, something that helps us afford college, but you write in your book that government aid actually contributes to the problem. Can you explain that for us?

Vedder: Sure. When they started the student loan programs around 1970, and they grew very large in the late ’70s, an extension of the Student Loan Act provided this money.

When this happened, colleges said, “Aha! Kids are going to be able to afford college more than before, so we can be more aggressive in raising our fees.”

And if you compound that over 40 years, which is the amount of time that has passed since then, … kids are now paying about double the tuition fees they would’ve paid if that had not happened.

So the tuition fees in America have been pushed up by the student loan programs. I think Bill Bennett, who was secretary of education, wrote a op-ed in The New York Times, of all places, in 1987 where he made that point.

And a lot of people poo-pooed it and said, “Ah, that’s not true.” But the research from the New York Fed and the National Bureau of Economic Research has validated what Bill Bennett said.

Davis: Wow. So would you say government intervention really is the key driver, the main driver of tuition these days? We see tuition every year going up.

Vedder: It has been. Now, in fairness, in a lot of recent developments, tuition fees are starting to rise less rapidly and schools are desperate because enrollments have been falling.

Fees went up so much that college became prohibitively expensive for some people, particularly low-income people [who] saw these massive sticker prices and they just didn’t apply in some cases to college.

I call this the law of unintended consequences. Things turned out to be just the opposite of what the government intended.

Davis: Do you think there’s any hope of reversing that with federal policy?

Vedder: It’s going to be tough because our vested interests are always going to fight change. If we did things right, we would start reversing that and we can whittle away at it.

We can limit student loans, the number of years you could borrow, we could limit it to only undergraduate education and not expensive graduate education. We can cut out something called Plus loans, which are loans often made to parents of students.

We could also make the loans more on a commercial basis, that is you don’t get the money unless there’s some reasonable prospect that you’re going to graduate. You got to have a minimal academic status.

There are a lot of things we could do to improve the system, but we need to start doing those things.

Davis: I want to ask you also about the issue of free speech on campus, which is increasingly an issue that even the president has addressed.

Back in the ’60s, the sort of young, new left on campus were championing free speech. And speculate as to why, I mean, it certainly helped their voice. But now that they have a monopoly on the university, it seems that they’re more in favor of shutting it down.

Just historically, I’m curious about when this started. When did free speech really start getting shut down on campuses? Is this a recent phenomenon?

And we had the classical liberal revolution that is what made us what we are today as a nation and planet, really, a wealthy and prosperous place. All that started way back then and then we were getting rid of barriers to free speech, the ideas enhancing free speech.

… We had, in the 1950s, some restriction on free speech, but in what was called the McCarthy era, where Sen. [Joseph] McCarthy, who was … most people would say was a conservative Republican, but I don’t look at that in quite that way, he was fiercely anti-Communist. And we had loyalty oaths that some professors had to sign in order to have jobs as teaching and so on.

So we’ve had episodes in American history where government has interfered with the process of education to impose certain restrictions.

We all have to think alike because there is a progressive way of thinking and that problem has grown, I think gradually, since the ’80s and the ’90s, but it is certainly reached a crescendo level in the last decade or so.

But again, if the federal government weren’t in the higher ed business at all, which essentially they weren’t before 1960 or ’65, I don’t think we would be having these problems. Or at least we wouldn’t have them at the level of severity that we do. Because colleges were competing for students without subsidies from the government.

There are consequences when you turn people off and a lot of these protests have turned people off.

Look at Evergreen State in the state of Washington where they went wild with protests and, at one time, were even telling certain students, white students, that they couldn’t go to campus. And what’s happened there, dramatic decline in enrollments and so forth.

I think the American people, by and large, have a different set of values with respect to these things than is prevailing in the collegiate communities.

Schools like Yale get away with murder in this regard because for one thing, they have huge endowments so no matter what they do, they’re insulated from the market. And we need to let market forces work more and the biggest single thing that would help that is for the government to get out of the higher education business.

Davis: Yeah. I saw a few years ago … the Mizzou controversy with the professor getting fired because she was involved in the physical confrontation. I mean, they saw a drop-off of students.

Vedder: Dramatic at Missouri. Several thousand, they’ve had to let go a number of faculty members and what not.

The irony of it is, a secondary effect is appropriations on the part of the state government from the university have fallen significantly because the legislators are fed up with this. And rightfully so, I might add, in this case.

So protesting is costly to universities, but they feel they have to allow [it] because they’re being intimidated by a small group of students. Sometimes not so small, sometimes medium-sized group of students on some of these campuses.

It’s time that we stand up to this and one way to do it is to threaten the removal of federal funds. President Trump intimated as much in his recent executive order.

Davis: Last question I just want to ask you. … Some members of Congress [are] talking about how … they’ve kind of been turned off by the way that universities have gone and are saying that college isn’t for everyone, it’s not as good as it’s cooked up to be, we need to consider trade schools, look at those.

I think a lot of conservatives are interested in that because it would break up the monopoly that, among other things, is indoctrinating a new generation of people.

So with that, with the college costs, and everything that goes into a four-year university, do you think it’s still worth it for young people to attend the four-year college?

Part of it is vocational, they’ll develop credentials that make them look good to law schools and look good to employers and so forth. And so there are some students, some people for whom this is true.

But there’s a large group of students for whom this is not true or who drop out or fail. Forty percent of the kids drop-out, another 40% graduate and they end up doing jobs like being a barista or working in a Walmart or a Home Depot or something like that. So the risk of going is rising. The risk of going to college.

So is it less risky to be trained to be a welder or a plumber? Yes. Even there you can fail, but if you fail, the consequences are not as great. You don’t have four years of schooling, you have less money involved.

Vocational education, which, by the way, 50, 75 years ago, we did have a more vibrant vocational education program in America and we got away from that because we told everyone, “College is for all. You have to go to college.” That was very bad advice and we’re reaping the consequences of it now.