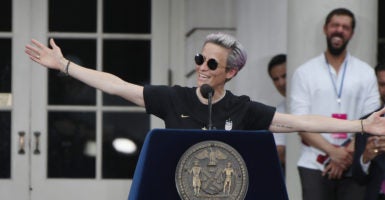 Megan Rapinoe and members of the United States women's national soccer team are honored at a ceremony at City Hall on July 10 in New York City. (Photo: Bruce Bennett/Getty Images)

—Elisha Krauss of The Daily Wire joins us to talk about topics ranging from feminism to fashion to what it’s really like to work with the one and only Ben Shapiro.

—We address a New York Times article that went viral headlined, “Do Americans Really Need Air-Conditioning?,” and whether or not air-conditioning is sexist.

—We cover the latest “Little Mermaid” drama about a black Ariel and the trending #NotMyAriel on Twitter.

—Lastly, we crown our Problematic Woman of the Week … Tiny Jag! Tiny Jag is a biracial Detroit rapper who dropped out of a musical festival after that festival tried to charge white people twice as much per a ticket than minorities.