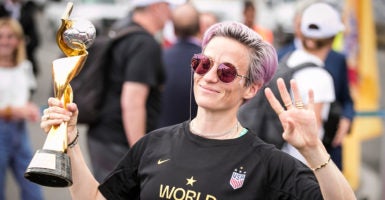 Megan Rapinoe, co-captain of the U.S. women's national soccer team, said on CNN that she and every teammate she spoke would reject an invitation to the White House. (Photo: Ira L. Black/Corbis/Getty Images)

The U.S. women are the world soccer champions. They are the hard-fought victors of the FIFA Women’s World Cup, having defeated the Netherlands 2-0 in the final last weekend.

Unfortunately, their outstanding performance has been overshadowed by an ongoing feud between Megan Rapinoe, the team’s co-captain, and President Donald Trump, leader of the free world.

The dust-up began when a months-old video of Rapinoe resurfaced. In the video, Rapinoe was asked if she was excited about possibly being invited to the White House to celebrate a World Cup championship. Rapinoe responded bluntly that she would not go “to the f—ing White House.”

Then, on Tuesday, appearing on CNN with Anderson Cooper, Rapinoe doubled down on her response and spoke for the whole team, saying, “I would not go and every teammate that I’ve talked to explicitly about it would not go.”

She suggested that appearing at the White House could mean the team being “co-opted or corrupted by this administration,” and that “there’s so many other people that I would rather talk to, and have meaningful conversations that could really affect change in Washington, than going to the White House.”

No matter what your thoughts are on Rapinoe, the right to protest and speak critically of one’s elected officials is Rapinoe’s First Amendment right. It’s a right many citizens across the globe do not enjoy, and it should be protected vigilantly here.

She also has the right to refuse an invitation to the White House from the commander in chief. Whether that’s reasonable is an entirely different matter. We believe she’s mistaken.

Skipping out on White House invitations is not a new phenomenon exclusive to the Trump White House.

Similarly, Michael Jordan skipped an invitation from President George H. W. Bush in 1991 and instead opted to spend time with family in North Carolina.

Whether it’s Rapinoe refusing to meet with Trump or past superstar athletes taking a pass, we fully support their right to protest. But our question for any athletes who snub such a coveted invitation is, what exactly are you upset about?

We, like Birk, are also passionate pro-lifers, but if given the opportunity to visit Obama’s White House, we would gladly have accepted it and honored the office.

Rapinoe’s problem seems to go further than the president himself, though. When she refuses to put her hand over her heart during the United States national anthem, one wonders if she has a problem with America writ large.

Is she just upset that Trump is the president? Or is she upset at the massive strides women have made in America in recent generations?

In her CNN interview, Rapinoe said, “Maybe America is great for a few people right now, but it’s not great for enough Americans in this world.”

Yet the facts paint the exact opposite picture. What we have in America is growing prosperity for every demographic, particularly women.

Since January of 2018, more than 2.8 million U.S. jobs have been created, and of those, over 1.6 million have gone to women—a whopping 58%, according to the Bureau of Labor Statistics.

Moreover, unemployment among women is now at its lowest rate in 65 years, meaning women are being economically empowered across the entire country.

This is incredible news for our nation, yet Rapinoe doesn’t seem to be celebrating it.

In fact, lately she has criticized the apparent pay gap between the U.S. men’s and women’s soccer teams. Why, she asks, does the women’s team make less than the men?

The answer is much more complicated than she has made it out to be, but it certainly doesn’t boil down to simple discrimination.

Market factors play a huge role in determining players’ pay—if the men’s team brings in more money in sponsorships, for instance, that will bump up their pay relative to the women’s team. Unique collective bargaining agreements also make a difference.

So she disagrees with conservatives about the so-called pay gap. Still, what does any of that have to do with Trump? Why not simply celebrate a hard-won victory at the White House?

Rapinoe is a great American champion representing an amazing country on the world stage. Yet her obtuse refusal to go near the White House makes us wonder if she is accurately representing America.

While some of her ardent followers may also refuse to visit the White House, countless other Americans would snatch that invitation up in a heartbeat—and be honored to attend.