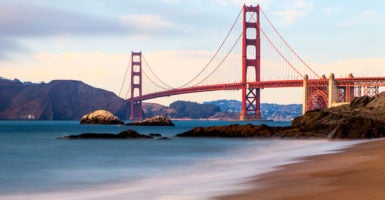 Most of the public was outraged when, during the financial crisis of 2008, Congress provided a massive financial bailout, including $70 billion of taxpayers’ money to insurance giant AIG and $80 billion to U.S. automakers General Motors, Chrysler, and GMAC.

Even most politicians who voted in favor of the bailouts did so begrudgingly, in part because they considered it a way to contain the damage from arguably unforeseen circumstances.

By contrast, state and local governments have accumulated many trillions of dollars in debt with clearly foreseeable consequences.

If states want to make good on their obligations, many will have to drastically increase taxes, severely cut services, or default on their debts and lose access to credit.

However, it’s only a matter of time before state policymakers, not wanting to face those consequences, seek a federal bailout.

That’s why Sen. Tom Cotton’s sense of the Senate resolution (S. Res. 268), expressing the position that the federal government should not bail out any state, is so important.

Considering that states cannot declare bankruptcy, many states’ failure to confront absolutely unsustainable pension and other obligations shows that they are counting on a federal bailout.

Cotton’s succinct sense of the Senate resolution says that the federal government should not take any “action to redeem, assume, or guarantee any debt of a State” and that the secretary of the Treasury “should report to Congress any negotiations to engage in actions that would result in an outlay of Federal funds on behalf of creditors of a State.”

As the resolution points out, every state in the U.S. is a sovereign entity with its own authority to collect taxes and to issue debt, with a legal obligation to fully disclose its financial condition to investors.

Moreover, Congress has already rejected past requests for bailouts of defaulted state debt, and back in 1842, the Senate requested that the Treasury report any negotiations that discussed federal assumption of state debt “to ensure that promises of Federal Government support were not proffered.”

While all states have sizable debt—primarily from unfunded pensions and other public employee benefits—some have dramatically more than others.

Take states’ estimated $6 trillion in unfunded pension promises. That works out to about $18,300 for every man, woman, and child—or $73,200 for a family of four—in America.

The five states with the greatest unfunded pension obligations—Alaska, Connecticut, California, Illinois, and Oregon—have per-capita pension debts ranging from $28,000 to nearly $47,000. That’s two to five times as high as the five states’ with the lowest pension debts, which range from $8,500 to $10,000 per capita in Tennessee, Indiana, Nebraska, Florida, and Idaho.

If Walmart were facing bankruptcy, Congress wouldn’t require Target to cover its payrolls. But that’s what a federal bailout would be like, by unfairly forcing taxpayers in states such as Tennessee and Florida to pay for pensions and other public-sector workers’ benefits in Illinois and California, even though they don’t live in, or receive any services from, those states.

The fact that governments don’t face bottom lines is already problematic enough for workers, families, and businesses whose incomes seem like an open spigot for politicians to tax.

Expanding lawmakers’ reach into the pockets of people they do not represent would only exacerbate what economists call “moral hazard”—essentially, the consequence of removing personal responsibility.

States that want to protect their current and future residents by getting their fiscal houses in order have plenty of options.

For starters, they can look to the sensible pension reforms enacted in states such as Michigan and Oklahoma that significantly curbed costs and to fiscally responsible states such as Nebraska and Tennessee.

This article has been corrected to reflect that GMAC, not Ford, was part of the $80 billion bailout for auto companies.