A Year After the Supreme Court Rules Against Unions, What’s Changed 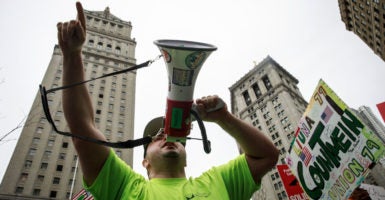 Union activists and supporters rally on June 27, 2018, in Lower Manhattan against the Supreme Court's decision in the Janus v. AFSCME case. In a 5-4 decision that day, the justices ruled that public employee unions can't require nonmembers to pay fees. (Photo: Drew Angerer/Getty Images)

Pick a state, any state where rank-and-file public employees differ with the political agenda of their union leadership, and they can make a clean break from the union if they choose.

That’s because the U.S. Supreme Court ruled that nonunion government workers can’t be compelled to pay dues or other fees to support a union.

A year after that decision, though, attorneys and policy analysts who spoke with The Daily Signal say they find that too many Americans remain unaware of their First Amendment rights in the workforce.

They also express concern that union operatives and their allies in government are pushing legislation to undermine the high court’s 5-4 decision on June 27, 2018, in Janus v. American Federation of State, County, and Municipal Employees.

In one response, the Mackinac Center for Public Policy, a free market think tank in Michigan, set up a website that enables employees to start the process of opting out of their union. Those interested go to the “My Pay. My Say.” website, enter some personal information, and name their employer and union association.

Michigan became a right-to-work state in 2013 after then-Gov. Rick Snyder, a Republican, signed into law a measure prohibiting new contracts that require workers to pay union dues or fees as a condition of employment.

Prior to the Supreme Court ruling a year ago, Michigan’s right-to-work law carved out an exception for police officers and firefighters. But in Janus v. AFSCME, the justices overturned a 1977 decision that said public-sector employees may be required to pay “fair share” fees, also known as agency fees, if they decline to join a union.

The Janus ruling affects about 5 million government employees in 22 states who no longer are required either to join a union or pay union fees as a condition of employment.

The states most affected by the decision were not already right-to-work states. On the West Coast, this list includes California, Oregon, Montana, and Washington. On the East Coast, the list includes Rhode Island, New York, New Jersey, and Pennsylvania.

“Public employees across the country now have a right to choose whether or not the union is doing a good job and whether they want to support the union and the union’s political agenda,” Vinnie Vernuccio, a senior fellow with Mackinac Center, told The Daily Signal in an interview.

“You have websites like ours, and others, informing public employees about their rights, which the unions are trying to hide from them,” Vernuccio said. “But on the flip side, you have some state legislators trying to do whatever they can to trap public employees into staying in the union. That’s why you now see lawsuits across the country filed against these states that are thumbing their nose at the Supreme Court ruling.”

Oregon and Washington passed laws that some free market policy analysts and attorneys view as unconstitutional assaults on the Janus ruling.

Withe said provisions of the legislation would “require public employees to pay union shop stewards,” “require the state to turn over personal employee information periodically to the union,” “permit unions to authorize dues deduction via telephone,” and “allow unions to decide how someone can cancel their dues deductions.”

“Unions know that when employees have a choice about whether or not they want to financially support the union’s political agenda or keep their hard-earned dollars for themselves and their families, these workers will leave the union,” Withe said in an interview with The Daily Signal. “So it’s not surprising to see the unions lean on their allies in government after the Janus ruling to try and unwind the decision any way they can. But we will do everything we can to support worker freedom and to challenge this law.”

Washington state’s House Bill 1575, which became law, includes language making it easier for unions to deduct dues from public employees and making it more difficult for those same employees to cancel the deductions, according to a press release from Freedom Foundation.

The Daily Signal sought comment from state lawmakers who supported the bills, but none had responded at publication time.

Tom McCabe, CEO of Freedom Foundation, suggests in a written statement that “by spending millions of other people’s dues dollars on lawsuits, lobbying, and bullying tactics intended to keep the workers in the fold,” leaders of government unions are acknowledging that their members are dissatisfied.

“If government unions can’t compete in a free market for the loyalty of public employees, why should consumers be forced to buy their inferior product?” McCabe asked, adding:

Nothing in Janus makes joining a union impossible or even more difficult. It simply acknowledges that public employees have the same First Amendment rights as every other American citizen, and those rights can’t be sacrificed to the greed of a well-connected special interest.

Freedom Foundation, headquartered in Olympia, Washington, also took up the case of California public schoolteachers who allege that unions continue to deduct dues from their paychecks in violation of the Janus decision.

In anticipation of losing the Janus v. AFSCME case at the Supreme Court, the National Education Association, the country’s largest teachers union, set up a website directed against what it calls “greedy CEOs and special interests,” to spur government workers to express support for their unions.

“It is telling that the CTA’s response to teachers wanting to leave the union is not to reconsider the policies and activities that made the teachers want to leave in the first place,” Karen Sweigart, a lawyer with Freedom Foundation, said in an email to The Daily Signal about the California Teachers Association. “Instead, the CTA is content to further alienate teachers by continuing to take money from nonmembers against their will.”

Frank Wells, a communications official with the California Teachers Association, has been dismissive of the Freedom Foundation lawsuit. Wells described the new court case to The Daily Signal as an “attack on public education and public employees.”

But Rebecca Friedrichs, an elementary school teacher who worked for 28 years in the Savanna school district in Anaheim, California, told The Daily Signal that the problem for teachers in California is that unions at the state and national levels have become immersed in politics.

“Locals do all the work and teachers like their local unions,”  Friedrichs said. “They don’t know most of their money is going to the state and national union. Teachers want to teach, and they don’t want to be involved in politics.”

Friedrichs was the lead plaintiff in a 2016 case before the Supreme Court that raised the same First Amendment argument against mandatory union fees as the Janus case did.

However, with Justice Antonin Scalia’s unexpected death a month after oral arguments in the Friedrichs case on Jan. 11, 2016, the Supreme Court wound up deadlocking, 4-4. That left a lower court ruling in place that upheld California’s “agency shop” law until the high court’s Janus ruling outlawed mandatory union dues.

“Unions are supposed to unite and protect teachers and give them one voice,” Friedrichs told The Daily Signal, adding:

But instead they divide teachers and attack teachers who ask for accountability. Unions have become what they used to fight. They are not really unions in the traditional sense. The teachers unions have infiltrated our profession to fulfill a social and political agenda. Very little about what they do is about representing us as teachers.

One year after the Supreme Court’s ruling in the Janus case, supporters have good reason to be concerned about “anti-Janus” legislation at the state level, the Mackinac Center’s Vernuccio said.

But, Vernuccio said, right-to-work advocates also have good reason to be encouraged about the long-term prospects for employee freedom because the ruling explicitly says government employees should be permitted to “opt in” and offer “affirmative consent” before union dues or fees are deducted from their paychecks, rather than having to “jump through hoops” to opt out.

“A critical part of the Janus ruling says that everything the union does is political,” Vernuccio told The Daily Signal. “That’s why the ‘opt in’ question is so important, and I think it’s the next major battle.”

Vernuccio said he sees signs that “outreach efforts” organized through the Mackinac Center and allied organizations aimed at educating government employees are beginning to pay off.

On the other side of the country, in the smallest state in the union, Mike Stenhouse, CEO of the Rhode Island Center for Freedom and Prosperity, has implemented his own version of online outreach.

In a press release, the former pro baseball player said: “After hearing last summer from dozens of workers, frustrated that their unions were not adequately informing them of their rights following the Janus decision, our center quickly launched, with little funding, our MyPayMySay campaign, in conjunction with our national partner, the Mackinac Center for Public Policy.”

Stenhouse cites numbers showing that since the education campaign began, 26% of the staff at the University of Rhode Island left their NEA affiliate and the percentage of state workers who decided against joining a union doubled, from 3% to 6%.

Back on the West Coast, the Freedom Foundation, with its own website devoted to “opt out” initiatives, marked the one-year anniversary of Janus by releasing figures showing the foundation assisted more than 50,000 government workers—concentrated mostly in Oregon, Washington, and California—who had left their unions.

“An important goal is to remove union influence from politics,” Withe, the group’s Oregon director, said. “They are taking dues from public employees to fund liberal candidates, to raise taxes on the private sector, and to grow the size of government.”