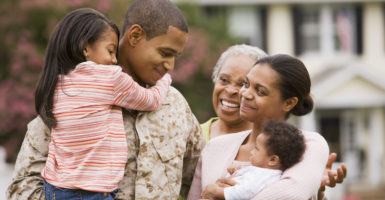 Kerry McDonald is a senior education fellow at the Foundation for Economic Education and author of “Unschooled: Raising Curious, Well-Educated Children Outside the Conventional Classroom" (Chicago Review Press, 2019).

While protecting American freedom, the active-duty men and women of our armed forces want education freedom as well.

That’s the general finding of a new report by EdChoice, a nonprofit organization that promotes educational choice through research and advocacy.

The report includes results of a survey of nearly 1,300 current members of the U.S. military and their spouses, noting their impressions of military life and their preferences related to K-12 education.

According to the report, service members encounter frequent stress and separation, and concerns about educating their children amid so much change can weigh on them.

Education choice can help to reduce the uncertainty and apprehension associated with frequent moves and deployments. Having options other than an assigned district school in an appointed location can put military families more at ease.

Indeed, the education of their children is of utmost importance to military families. The report notes that a majority of military parents say that they “significantly changed their routine” because of their child’s education, at a rate 18 percentage points higher than the national average.

Education is a big deal for military parents, and they want education options that offer more freedom and flexibility.

One of the EdChoice report’s lead authors, Lindsey Burke, director of the Center for Education Policy at The Heritage Foundation, told me:

The strongest support was for education savings accounts, which makes sense, considering the type of flexibility ESAs would provide military families, who face unique challenges—not the least of which are frequent moves.

Education savings accounts may be particularly appealing to military families because they enable parents to access a portion of a student’s education tax dollars from a government-authorized savings account with an array of education options, ranging from classes and tutoring to special-needs services and school tuition or future college fees, and books and supplies.

Additionally, more military families are choosing to bypass outside schooling altogether in favor of homeschooling, which can offer a consistent, family-centered approach to learning.

As PBS reported: “For active-duty military families juggling frequent moves and long deployments that may take a parent away for more than a year at a time, home schooling appears to be growing in popularity as a means of providing stability in their children’s education.”

In the EdChoice survey results, the researchers also found homeschooling to be a big draw for military families, citing data indicating that service members homeschool their children at roughly double the rate of nonmilitary personnel.

In this survey, safety was a primary motivator for military parents who chose to homeschool their children.

As Burke told me:

One of the things that really stood out to us in this study was that some 40% of military parents ranked a safe learning environment in their top three factors when looking for a school.

And notably, among military families choosing to homeschool, safety was their top reason for doing so.

Beyond safety, homeschooling provides the flexibility and customization military families need, as they move from assignment to assignment.

Military parents, like all other parents, want what is best for their children. They want to be empowered to make the best choices for their kids’ education and to ensure their safety and well-being.

Expanding education choice options to all parents frees them of unsatisfactory school assignments and broadens learning possibilities for all children.