What Those Decrying America’s ‘Endless Wars’ Are Really Talking About 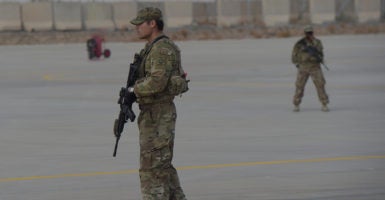 A U.S. soldier stands guard at the Kandahar air base in Afghanistan on Jan. 23, 2018. (Photo: Shah Maria/AFP/Getty Images)

From the presidential candidate debate stage to new think tanks, voices from both left and right are demanding an end to America’s endless wars. Only one problem: We’re not fighting any endless wars.

No matter. The endless-war warriors want us to do less on the world stage.

Even in this age of great power competition, these “new” isolationists would prefer America step off the playing field and wave from the sidelines. It’s a strategy that would work well for Beijing, Tehran, and Moscow—but not for the U.S.

No one is denying we’ve seen plenty of wars—and long ones at that. The U.S. has fought more than it ever wanted, including the global war on terrorism and related conflicts in Iraq and Afghanistan. But America’s endless war days have ended—at least for now.

That’s not to say we don’t have troops in combat zones around the world. But, by any reasonable definition, America just isn’t at war.

We are, for sure, dealing with the aftermath of conflicts in Iraq and Afghanistan. But President Barack Obama’s withdrawal of U.S. forces from Iraq marked the end of that war, and he transitioned the effort in Afghanistan from all-out fighting to an advice-and-assist mission.

Today, what America does around the world is pretty much what it has been doing since 1945—providing forward presence, deterrence, counterterrorism, training, assistance, and freedom of navigation. That’s important work and a heavy lift, but it ain’t war.

So what the carpers are really complaining about is not “endless wars” (an admittedly powerful albeit dishonest catch phrase), but U.S. foreign policy in general. So the question is: What foreign policy do they want instead?

The U.S. is a global power with global interests and responsibilities. That’s not a choice; it’s just who we are.

No one today is arguing that the U.S. can child-proof the world to make America safe. The overly ambitious efforts of the George W. Bush era clearly created as many problems as they solved.

But, walking away from problems doesn’t work well either—as the Obama team more than amply demonstrated.

The reset with Russia produced a war in Ukraine. Tried to buy Iran off, and that didn’t work. And they stood by as China moved to make the South China Sea its own and North Korea’s Kim Jong Un built out his nuclear arsenal.

President Donald Trump has tried to stake out a middle ground. He isn’t interested in being the world’s babysitter, but he is willing to stand up and demonstrate sufficient resolve to protect America’s interest. He has managed to do that—and finish off the caliphate—without starting any new wars.

So where are the endless wars? Or, more to the point, what’s so bad about this administration’s foreign policy?

Look around, and you’ll see Russia stonewalled in Crimea. Iran just failed to close the Straits of Hormuz. The DPRK is negotiating. The Stars and Stripes proudly sail the South China Seas, and there is nothing Beijing can do about.

Apparently, that’s not good enough for the end-the-endless-war warriors. They want us to do even less. But “do less” is a poor prescription for dealing with the world as it is.

What America needs now are discussions about how to prudently exercise its power in a complex world: what’s the right balance of multilateral action, prodding allies, making compromises, and standing strong.

What we don’t need are politicians and pundits who suggest that, if America simply does nothing, our enemies and competitors will behave just as they should and everything will be just fine.

Trump’s foreign policy has been dramatically successful at rebalancing U.S. interests. It has not brought war, much less endless war.

To withdraw further from the world stage would only invite the world’s bad actors to take center stage once more.