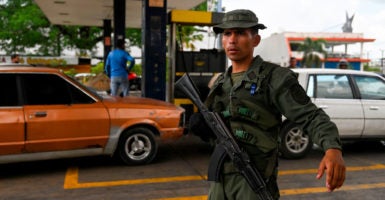 A member of the Venezuelan National Guard is on duty May 25 at a gas station in the town of Acarigua in the state of Portuguesa. (Photo: Marvin Recinos/AFP/Getty Images)

The citizens of Venezuela have gotten used to spending days parked in mile-long lines for state-owned gasoline as shortages worsened for the nation, which holds the largest oil reserves in the world.

In the capital of Caracas, hundreds of motorists waited in lines last month while carrying rocks and pipes to defend themselves as Venezuela’s socialist regime clung to power, The Wall Street Journal and others reported.

Violent crime became common at fueling stations, and Reuters reported one instance of a man being killed.

A teenage boy lost his eyesight Monday after a policeman fired pellets at him during a protest of fuel shortages in Tariba in northwest Venezuela, The Sun newspaper in the United Kingdom reported.

Why the fuel crisis?

Sanctions implemented in January by the U.S. banned the sale of diluting agents used for transporting and processing crude oil to Petróleos de Venezuela S.A., the country’s state-run oil and natural gas company.

Amid the sanctions, U.S. allies also were “prohibited from doing business” with the state-owned entity, according to a report by Ana Quintana, a senior policy analyst for Latin America and the Western Hemisphere in The Heritage Foundation’s Davis Institute for National Security and Foreign Policy.

The lack of fuel prevented citizens from going to work and farmers from delivering produce to cities, and led to the hoarding of fuel in homes despite the danger, The Wall Street Journal reported.

In the face of already severe food and medicine shortages, the scarcity of fuel has perpetuated Venezuela’s humanitarian crisis. Some 90% of Venezuelans live in poverty, according to a report from the Council on Foreign Relations, which notes that 1 in 10 has deserted the country. According to UNHCR, the refugee agency arm of the United Nations, there are more than 4 million Venezuelan refugees.

The goal of the sanctions, the Trump administration argues, is to force Venezuela’s illegitimate president and dictator, Nicolás Maduro, from power and pave the way for interim President Juan Guaidó.

Quintana writes that any future income from the state-owned company’s American subsidiary, GITGO, should be deposited in blocked accounts turned over to Maduro’s democratically elected successor.

Guaidó condemned the violence Monday that cost 16-year-old Rufo Valendria his sight, reported The Sun, which published a gruesome photo of the bleeding boy.

Opponents of the regime inside and outside Venezuela say the nation crumbled under “the government’s two decades of self-proclaimed ‘socialist revolution,’ which has been marred by corruption and mismanagement, first under the late Hugo Chavez and now under Maduro’s rule,” as the Associated Press put it.

Guaidó became president in January. As Quintana writes in a Heritage Foundation report, “According to Article 233 of Venezuela’s constitution, if a void exists in the chief executive, next in line of succession is the head of the National Assembly—which was Juan Guaido.”

The Maduro regime has not relinquished control even as dozens of countries recognized Guaidó as Venezuela’s rightful president. The regime successfully uses fear to control dissent.

Smuggling gasoline has become a trend. Gasoline bought in Venezuela is taken, by foot, across the border into Colombia, where prices are much higher, Al Jazeera reported Wednesday.

The report describes a young man pointing to his clothing, filled with holes, and noting the price of bread and flour increases daily. “I am doing this for food, to be able to eat,” he told Al Jazeera.

Though Maduro cites sabotage as the reason for the recent shortages without showing evidence, declining investment and paltry oil production long have hurt Venezuela’s refineries.

The regime implemented rations for gasoline, allowing citizens eight gallons a week in select states. In some towns, officials control gasoline sales by allowing those with certain license plates to purchase fuel only on specific weekdays.

“We don’t even think about food,” one citizen told The Wall Street Journal. “What I want is gasoline because I can’t keep missing work.”

“The [Maduro] regime has bankrupted Venezuela and forced millions into poverty and exile,” Quintana writes, with Colombia bearing the brunt of hosting refugees.

In her report, Quintana outlines steps the U.S. should take to pressure Maduro to turn over power: