A Fallen Warrior and the Unfading Flag 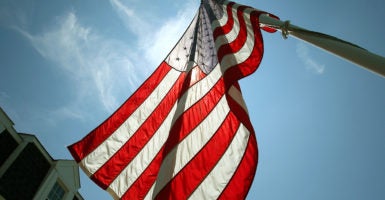 "Let us never forget that in honoring our flag, we honor the American men and women who have courageously fought and died for it," writes Lee Edwards. (Photo: Mark Wilson/Getty Images)

My wife Anne and I celebrated the Fourth of July early this year when we buried her brother, Jimmy, with full military honors in a tiny cemetery outside Scranton, Pennsylvania.

It didn’t matter that Jimmy was “only” a draftee and served in Alaska, where he manned a radar station, rather than Vietnam. What was important was that he was one of 40 million Americans, men and women, who have defended freedom in our nation’s history. He was entitled to a final tribute from the country he loved.

Jimmy was only 75, comparatively young these days, but he had smoked three packs a day for most of his life and breathing got harder and harder for him.

In his last years, he carried around an oxygen tank, but that didn’t stop him from visiting his aunt Marge, his cousins, and his friends on birthdays and holidays.

From time to time, he wound up in the hospital, but as soon as he was home and with his beloved Linda, he was on the phone and planning his next visit with an old friend on his sick bed or in hospice. In the words of his closest cousin, Jimmy Gordon, he was a walking beatitude.

Jimmy was a blue-collar Democrat—half-Italian, half-Irish—who had worked in a steel cutting factory for 30 years.

He loved to talk politics, even with me, despite my conservative ways. He did not trust Republicans, but he voted for Donald Trump because he thought he would shake up Washington and help make America great again.

We were greeted at St. Mary’s Cemetery by uniformed members of Post 6082 Shopa Davey of the Veterans of Foreign Wars, and two regular Army members and a chaplain looking sharp in their white gloves, creased uniforms, and spit-shined shoes.

Our eyes were drawn to the American flag that covered Jimmy’s coffin. Following a brief prayer, the Army members carefully folded the flag 13 times—for the original 13 colonies—into a tight triangle that resembled the three-corner hat worn by the Revolutionary soldiers under the command of Gen. George Washington.

As the officer offered the folded flag to Linda, he said: “It is my high honor to present to you this flag. Let it be a symbol of the great appreciation this nation feels for the distinguished service rendered to our country and our flag by your loved one.”

A Veterans of Foreign Wars member explained that the red of the flag symbolized courage; the white, high ideals; and the blue, vigilance. I silently added the motto of West Point—duty, honor, country.

As the mournful bugle notes of “Taps” echoed through the trees and along the hillside, I thought of how central a symbol to our nation and our history is our flag.

It flew at Bunker Hill, Yorktown, New Orleans, Gettysburg, San Juan Hill, the Argonne, Normandy, Okinawa, Pork Chop Hill, Hue, and Fallujah. It flies atop our memorials and monuments, our homes and our offices, our parades and our inaugurals, above the White House, the U.S. Capitol, and the Supreme Court.

Is there anything more American than the American flag?

This week, as Anne and I watch the fireworks exploding high above the Lincoln Memorial, we will remember the quiet Pennsylvania cemetery and the bitter-sweet notes of “Taps,” and the red, white, and blue flag covering Jimmy.

We will ignore the protesters who burn the American flag in a grotesque expression of free speech. Instead, we will turn to our favorite president, Ronald Reagan, who said:

Let us never forget that in honoring our flag, we honor the American men and women who have courageously fought and died for it over the last 200 years, patriots who set an ideal above any consideration of self. Our flag flies today because of their sacrifice.

Long may it continue to fly.